James Skofield’s first book for children was published in 1981. He has published many more books since then and has also translated several books from the German, two of which have won the Mildred L. Batchelder award from the American Library Association. He has also worked as a lyricist and librettist and his operas and songs have been performed in North America, Europe, and Asia. He lives and works in Walpole, New Hampshire, near deeply forested woodland. Both bears and birds sometimes come by to visit. 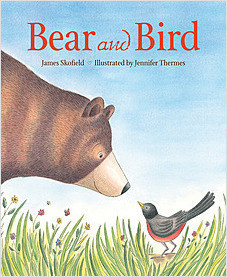