Brenda Jones grew up on Prince Edward Island, and then moved to Montreal in her early 20s, beginning a career in film animation. For 20 years she worked for private studios, doing color design, backgrounds, and art direction for many animated television series. Her parallel career as an illustrator began in the ’80s after her daughter was born. She has now published more than a dozen books, including Skunks for Breakfast, which won the Lillian Shepherd Award for illustration. 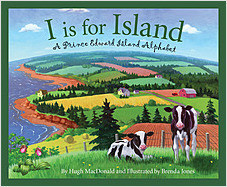 I is for Island: A Prince Edward Island Alphabet