Oki S. Han was born in Seoul, Korea, where she studied Western Painting at Ewha’s Women’s University. She later attended the Fashion Institute of Technology and the School of Visual Arts in New York City. Both an author and illustrator, Oki received the 2001 Irma Simonton Black & James H. Black Award for Excellence in Children’s Literature for her book, Basho and the Fox. The book was also a New York Times best-seller. Her other books include Basho and the River Stones and Sir Whong and the Golden Pig. Her books, Mr. Long Beard and My Hometown, both won the Korea Children’s Book Award. In 2005 Oki was selected as Illustrator of the Year at the Bologna Children’s Book Fair for My Hometown. 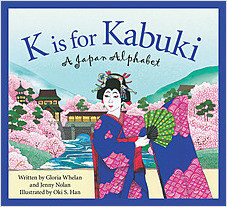 K is for Kabuki: A Japan Alphabet