Artist Robert Crawford graduated from the Rhode Island School of Design. His paintings have appeared on the cover of major magazines such as Fortune, Business Week, The Atlantic and U.S. News and World Report, as well as book covers for major publishers including Random House, Penguin/Putnam, and Avon. Robert’s work has won numerous awards and has been selected for permanent collection by the United States government and major corporations. Robert lives in Woodbury, Connecticut. T is for Taj Mahal: An India Alphabet 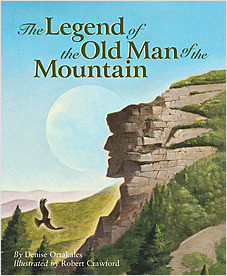 The Legend of the Old Man of the Mountain