Bridget Starr Taylor grew up on a hillside farm in northwestern Connecticut. She earned a BA in illustration at the Rhode Island School of Design. Bridget has lived for over 24 years in the (now very trendy) neighborhood known as the meatpacking district in New York City. She is married to an editor of the Wall Street Journal. In addition to illustration, Bridget designs and constructs sets and props for special events. Her clients have included the New York Public Library, Chase Bank/Metrotech Center, and the Bronx Zoo. Some of her illustration credits include the New York Times, Publishers Weekly, Sports Illustrated, and Sesame Street Magazine. 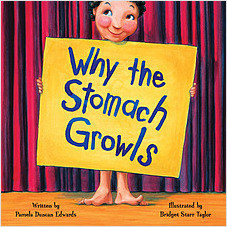 Why the Stomach Growls