John studied both science and art and in the early 90s decided to combine his interests in art and biology and became a biological illustrator. He is currently a Senior Biological Illustrator at the University of Michigan’s Museum of Zoology and has taught several classes as an adjunct lecturer at the University of Michigan’s School of Art. His past work has taken him to work on salmon in eastern Oregon, salamanders in western Oregon, Marbled Murrelets and sea lions on the Oregon coast, and marine invertebrates in Oregon and Alaska. John has also done freelance work for Weyerhauser, St. Martin’s Press, MIT press, The American Fisheries Society, Arizona Highways, Oregon State University, and others. John and his family live in Ann Arbor, Michigan. 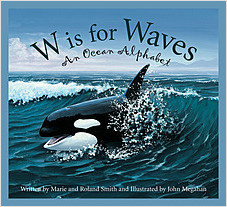 W is for Waves: An Ocean Alphabet