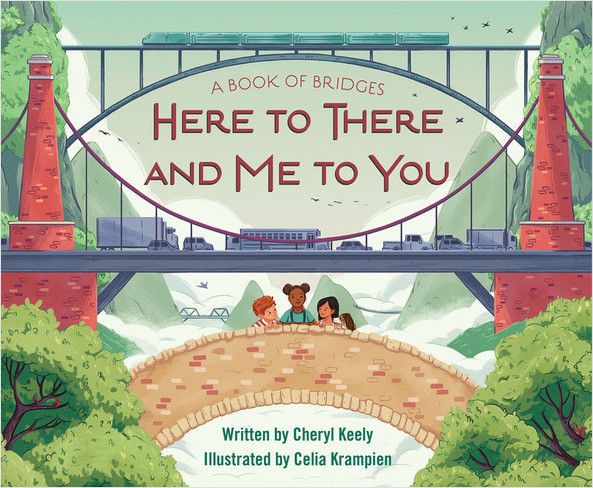 A Book of Bridges

Here To There and Me To You

Bridges are some of the most fascinating structures in our landscape, and they come in all forms. From towering suspension bridges to humble stone crossings, this book visits them all in sweet, bouncing text with expository sidebars. But while bridges can be quite grand, this reminds us that their main purpose is bringing people together. This is perfect for budding architects, as well as readers who can relate to having loved ones who live far away.

Kirkus Reviews - Here to There and Me to You

Bridges are great metaphors, but they are pretty cool in their own right. Keely selects nine bridges to illustrate different types of construction in different parts of the world, plus a few that give the word “bridge” a deeper meaning. Krampien draws each with a nice eye for detail, rendering them from a perspective that warms and humanizes them (her bird’s-eye view for the opening two-page spread is a winner). There is also a note of whimsy: the Golden Gate Bridge is actually orange (Golden Gate is the name of the strait the bridge spans); a rainbow isn’t actually a bridge but a mist of color. Keely provides a simple introduction to the bridges—this one is covered in wood, that one is made of stone, another is made of light—but she also provides more detail, broadening the book’s audience: “The world’s longest covered bridge is in Canada. It is about as long as 36 school buses—and crosses the Saint John River from Hartford to Somerville, New Brunswick.” Thus a soupçon of geography is added to the mix. In the end, holding hands can form a connection, too, from one to the other. This could be a prime time for corniness, but it is simply handled—and even makes sense. A fine introduction to bridges and the great truth of connectivity. (Informational picture book. 4-8)

Publisher's Weekly - Here to There and Me to You

Keely makes her children’s book debut with a contemplative exploration of bridges, citing real-life examples, such as the Golden Gate Bridge and Peru’s Puente de Piedra, and more metaphorical ones, including the arches created by backbends and rainbows. The straightforward central narrative (“Some bridges join country to country, making a big world seem smaller”) is supplemented by facts and details about the specific bridges that appear in Krampien’s artwork (“The Three Countries Bridge at the borders of France, Germany, and Switzerland only truly connects France to Germany. But Switzerland is only a hop, skip, and a yodel away!”). In her first picture book, Krampien uses a fresh, contemporary cartooning style to create expansive panoramas that showcase the bridges’ sizes and spans, as well the activity of the humans and animals they serve—particularly in the wildlife bridges of Banff National Park, which allow bears, wolves, and other creatures to cross highways safely. Keely’s tender closing example—of the bridge formed through the simple act of holding hands—cements the message of togetherness and connection that bridges (of all kinds) make possible.

A Book of Bridges: Here to There and Me to You

Author Cheryl Keely became a journalist because she never wanted to stop learning. But she also likes playing – digging in the dirt, running agility with her dog, blowing bubbles, and making messes in the kitchen. Writing picture books is the best of both worlds. She can combine her love of learning and love of play. When not writing, she volunteers with her dog, Dagaz, as a pet ambassador team with a local pet therapy organization. From Here to There and Me to You is her first picture book. She lives in Louisville, Kentucky, with her husband, a dog, a cat, and a fish she’s training to do tricks. Visit Cheryl at www.cherylkeely.com.

Celia grew up near Owen Sound in Ontario, Canada, in a house in the woods. She was very inspired by the surrounding wildlife and developed a love of nature and animals, subjects she still enjoys drawing today. She studied illustration at Sheridan College and currently lives in Oakville, Ontario, with her partner, her mischievous cat, and a nosey beagle. Visit her at www.celiakrampien.com.