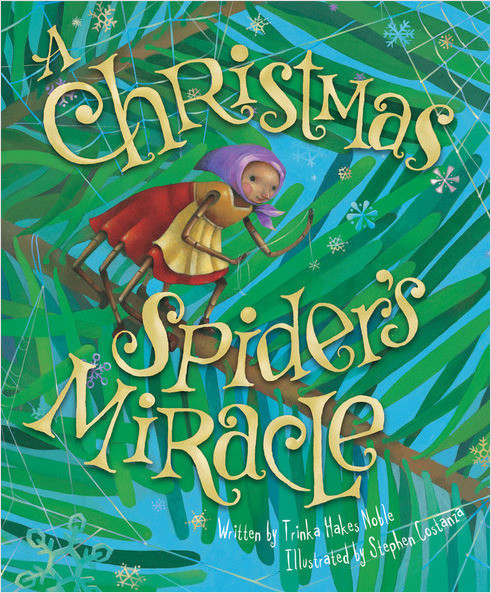 Long ago in a faraway place there lived two mothers. One, a humble peasant woman who struggled daily to provide for her children. And the other, a mother spider who also worked hard to care for her family. And although it would appear they were as different as night and day, these two mothers had more in common than would first seem. As the only holiday gift she can give her children, one cold Christmas Eve the peasant woman goes to the forest to get a tree, never noticing that someone has made a home among its branches. During the night, the mother spider spins webs decorating the tree, resulting in a Christmas that neither mother will ever forget. Based on an old Ukrainian story, Trinka Hakes Noble (The Orange Shoes) crafts an original heartwarming tale of the grace that can be found in the true spirit of Christmas. Trinka Hakes Noble's numerous picture books include The Scarlet Stockings Spy (IRA Teachers' Choice 2005), The Last Brother, The Orange Shoes (IRA Teachers' Choice 2008), and Apple Tree Christmas. Ms. Noble lives in northern New Jersey. Stephen Costanza attended the Philadelphia College of Art. His picture books are Mozart Finds a Melody, Noodle Man: The Pasta Superhero, and Ten Big Toes and a Prince's Nose. He lives in Belfast, Maine.

A Review of "A Christmas Spider’s Miracle" in Publishers Weekly

During the “bleakest of winters,” a gentle mother spider that resembles a wooden marionette tends to her children in a fir tree; indoors, a peasant mother mends clothing to earn money for her family. When the woman moves the tree inside for her children, she inadvertently saves the spider and her babies from freezing, and the spider repays her by spinning beautiful decorations for the tree. Costanza contrasts cold, velvety blues with the glowing warm tones of the village and cozy cabin in this classic Ukrainian story about generosity and goodwill. Ages 6–10.

Stephen Costanza attended the Philadelphia College of Art. His picturebooks are "Mozart Finds a Melody", "Noodle Man: The Pasta Superhero", and "Ten Big Toes and a Prince's Nose".