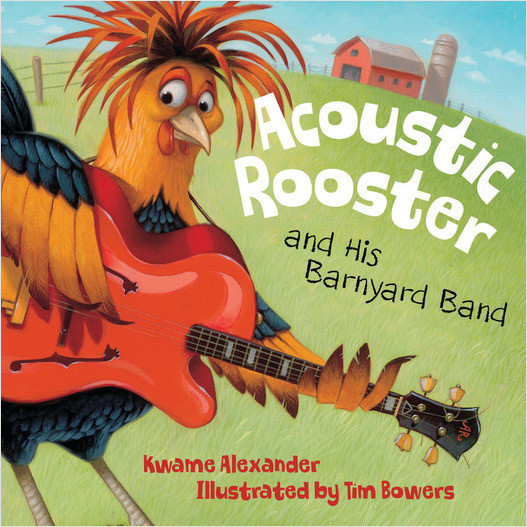 Acoustic Rooster and His Barnyard Band

When a jazz-loving rooster sets his sights on winning a barnyard talent show, he realizes he can't do it as a solo act. He's up against the talents of Mules Davis's cool duo and Ella Finchgerald's singing group. Acoustic Rooster calls on friends like pianist Duck Ellington, singer Bee Holiday, and percussionist piggy Pepe Ernesto Cruz. Together, the foursome makes beautiful music as they rock the barnyard. And while they may not win first prize, Acoustic Rooster realizes he has the world's best jazz band and that's all that matters. Colorful artwork from artist Tim Bowers (Memoirs of a Goldfish) ensures this story doesn't miss a beat. A glossary of musical terms and instruments rounds out this perfect introduction to jazz for young readers. Kwame Alexander is a poet, publisher, and an award-winning producer of literary programs. He has written for television, the stage, and authored 13 books. He conducts writing/publishing workshops at schools and conferences throughout the country. Kwame lives in the Washington, D.C. area. Tim Bowers has illustrated more than 25 children's books, garnering such awards as the Chicago Public Library's "Best of the Best" list. His work for Sleeping Bear includes First Dog and First Dog's White House Christmas. Tim lives in Granville, Ohio.

With his wild, feathered head and bass-guitar skills, Rooster is one cool cat … er, fowl. And with the big barnyard talent show coming up, he wants to put together the best jazz band ever. Author Kwame Alexander riffs off the names of, and introduces young readers to, jazz greats, which are snazzily depicted by illustrator Tim Bowers. There’s the elegant pianist Duck Ellington, the honey-voiced Bee Holiday and shades-wearing trumpet master Mules Davis. Though he doesn’t win the talent show, Rooster and his band (and young readers) have a great time. Back matter includes a glossary of jazz terms and a brief description of the featured musicians.

PreS-Gr 2–This delightful picture book explores the rich history of jazz via a story about a guitar-playing rooster who sets out to compete in the annual Barnyard Talent Show to find the farm’s best band. Rooster would like to join Thelonius Monkey’s crew, but the rules don’t permit zoo animals. Ella Finchgerald has a trio, but Rooster doesn’t scat. He decides to form his own band. “So, he went to see his cousin,/a pianist of great fame./And found him on the riverbank./Duck Ellington’s his name.” Duck, in top hat and bow tie, takes Rooster to the famed Cotton Club to hear Bee Holiday and other jazzy animals perform. Although the barnyard chicks “swoon” when Rooster’s group plays The Hen from Ipanema, not even an encore in “grand finale style” wins the band first prize. Still, shades-wearing Mules Davis’s comment, “That Rooster sure can play,” leads to a satisfying ending. The large illustrations are done in bold colors and have humorous, jazzy details. Notes on “Musicians, Characters, and Music” are included in the back matter. Children who enjoyed Jarrett J. Krosoczka’s Punk Farm (Knopf, 2005) will be taken with this one.

Kwame Alexander is a poet, publisher, and an award-winning producerof literary programs. He has written for television, the stage, and authored13 books. He conducts writing/publishing workshops at schools andconferences throughout the country.