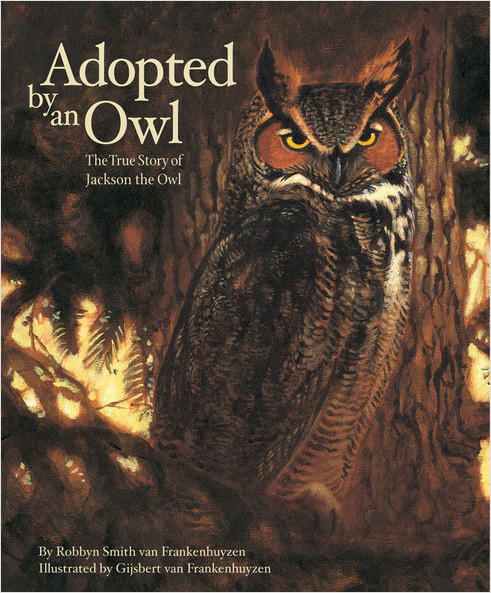 Adopted By An Owl

The True Story of Jackson the Owl

From the Author (Robbyn van Frankenhuyzen): "For twenty years we have rehabilitated a wide variety of wild critters, from fawns, foxes, skunks, and crows to opposums, raccoons, rabbits, and owls. Some of the animals were injured adults, others were orphaned babies, but all of them were in need of a little help to get them back into the wild. Growing up on a farm, as well as my training as an animal technician, prepared me for many of the medical situations that arose. Gijsbert took every opportunity to sketch, paint, and photograph our temporary guests during their stay on the farm. More importantly, Gijsbert was issued all the Federal and State permits needed to care for birds of prey. Without these permits, we would never have been able to care for hawks and owls. For good reason, caring for these birds is very tightly regulated and closely monitored. Taking an owl from its nest is dangerous and illegal. We have cared for many Great Horned Owls but none of them were like Jackson, the owl in this story. His personality was unique from the very beginning and we know that we were lucky to have shared such a close bond with this wild bird. This is the true story of his life with us. Enjoy." With illustrations from Gjisbert (Nick) van Frankenhuyzen, noted wildlife artist and illustrator of our Legends series as well as The Blue Spruce by Mario Cuomo and L is for Lincoln: An Illinois Alphabet.

Robbyn has dedicated much of her life to caring for animals. As a youngster she brought orphan animals home to mend and, as an adult, folks delivered them to her doorstep. Growing up as the middle child in a household with six sisters, she became the "entertainer." Her elaborate and theatrical storytelling was her way of standing out in a crowd and finding her own voice. Her parents encouraged her to make her hobby her career, so with that in mind she attended Michigan State University and became an animal technician where she continued to care for animals. She met her illustrator husband Gijsbert van Frankenhuyzen at the clinic where she worked. Together they share a mutual love of nature.Nature journaling is a part of their daily lives and an enjoyable way to document all the special animals that have been a part of their lives. The Hazel Ridge series introduces readers to their farm and their true animal tales.Today, Robbyn visits schools, zoos and nature centers sharing with children and adults the value of journaling, the joy of storytelling and the importance of protecting our natural world.