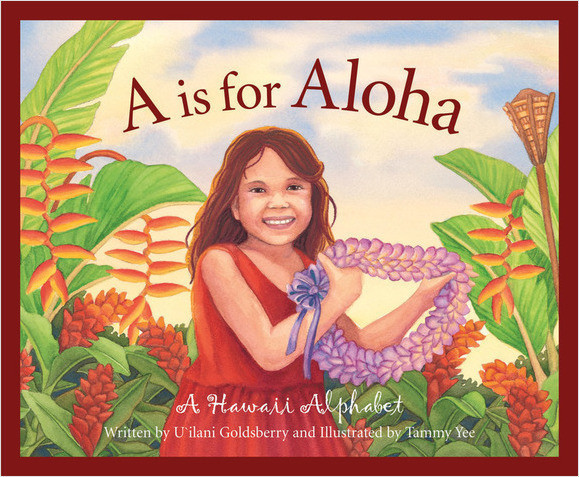 A is for Aloha

Completing our acclaimed Discover America State by State series is A is for Aloha: AHawaii Alphabet. The landscape of Hawaii is as exotic as its history and people. Written and illustrated by native Hawaiians, U'ilani Goldsberry and Tammy Yee, Ais for Aloha is a lovingly created introduction to one of the most-visited places on Earth. From the meaning of the word aloha to the plight of the state bird author U'ilani Goldsberry answers questions that most Malihinis have about this lush multi-island paradise. Author U'ilani Goldsberry was born on the island of Maui, in the small town of Pu'unene. She now lives in La'ie on the northeastern coast of O'ahu. She has written a variety of books including three Auntie U'i books. Illustrator Tammy Yee grew up in Honolulu, Hawaii. She currently lives in Windward O'ahu.

A is for Aloha - Teaching Guide

U'ilani Goldsberry was born on the island of Maui, in the small town of Pu'unene (the hill of the goose). Later her family moved to La'ie, on the northeastern coast of O'ahu. She has lived there ever since. U'ilani has written 10 books on various topics, including travelogues, cookbooks and other nonfiction works, as well as three Auntie U'i children's books: "The Storm Dog of the Ko'olau's," "The Shark Man of Hana" and "The Naupaka." A is for Aloha is her first book for Sleeping Bear Press.

Tammy Yee grew up in Honolulu, Hawaii, where she explored tide pools, swam in streams and wrote and illustrated spooky stories her teachers politely read. After she graduated from college she worked as a nurse. Having children rekindled her love for picture books, so in 1994 she exchanged her stethoscope for a paintbrush and she's been illustrating ever since. Tammy lives in Windward Oahu with her family, three birds, two upside-down jellyfish and a guinea pig named Twinkie.