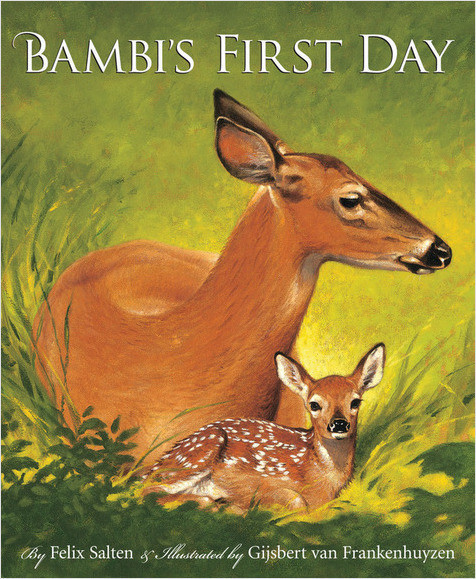 "He came into the world in the middle of the thicket, in one of those little, hidden forest glades which seem to be entirely open but are really screened in on all sides." So begins one of the most beloved nature stories. Felix Salten wrote Bambi: A Life in the Woods in 1923.It was translated into English in 1928, becoming a Book-of-the-Month Club hit. Though not originally written for children, the film rights were sold to the Walt Disney studios and the animated movie was released in 1942. Taken directly from the first chapter of Salten's original tale, Bambi's First Day depicts the early moments of the fawn's life in the safety of a forest glen and the shelter of his mother's embrace. Lush oil paintings by Gijsbert van Frankenhuyzen showcase the beauty of the natural world and tenderly bring to life the heartfelt devotion and love of a mother for her child.Felix Salten is the pen name for Austrian writer Siegmund Salzmann who wrote short stories, plays, novels, and essay collections. Artist Gijsbert van Frankenhuyzen has illustrated more than 20 books with Sleeping Bear Press, including the bestselling The Legend of Sleeping Bear; Mercedes and the Chocolate Pilot; Friend on Freedom River; and his popular Hazel Ridge Farm stories. Gijsbert lives in Bath, Michigan, with his wife, Robbyn. They both travel to schools in the Great Lakes area.

Felix Salten was the pen name of Jewish writer Siegmund Salzmann, born 1869 in Budapest, Hungary. His family moved to Vienna, Austria, shortly thereafter. Due to his family’s impoverished circumstances, Salten had very little formal education; however, as an adult he rose to prominence in Viennese literary circles. Salten wrote in a variety of genres including short stories, poems, plays, essays, and became an art and theater critic.

A trip to the Alps was the inspiration for Salten’s Bambi, ein Leben im Walde (Bambi, a Life in the Woods). It was translated from German into English by American writer Jay Vivian (David Whittaker) Chambers. Bambi was actually written for adults and not intended as a book for children. The coming-of-age story of its lead character, a roe deer, is set against the realistic backdrop of an animal’s life in the wild. It deals with mature and universal themes, including the often difficult cycle of life.

In addition to Bambi, Salten wrote three other animal stories: Bambi’s Children: The Story of a Forest Family; Fifteen Rabbits: A Celebration of Life; and Florian the Emperor’s Horse.

In the 1930s Austria became increasingly hostile toward its Jewish citizens. Salten’s books, including Bambi, were banned by the Nazis. Felix Salten moved to Zurich, Switzerland, in 1938 and lived there until his death in 1945.