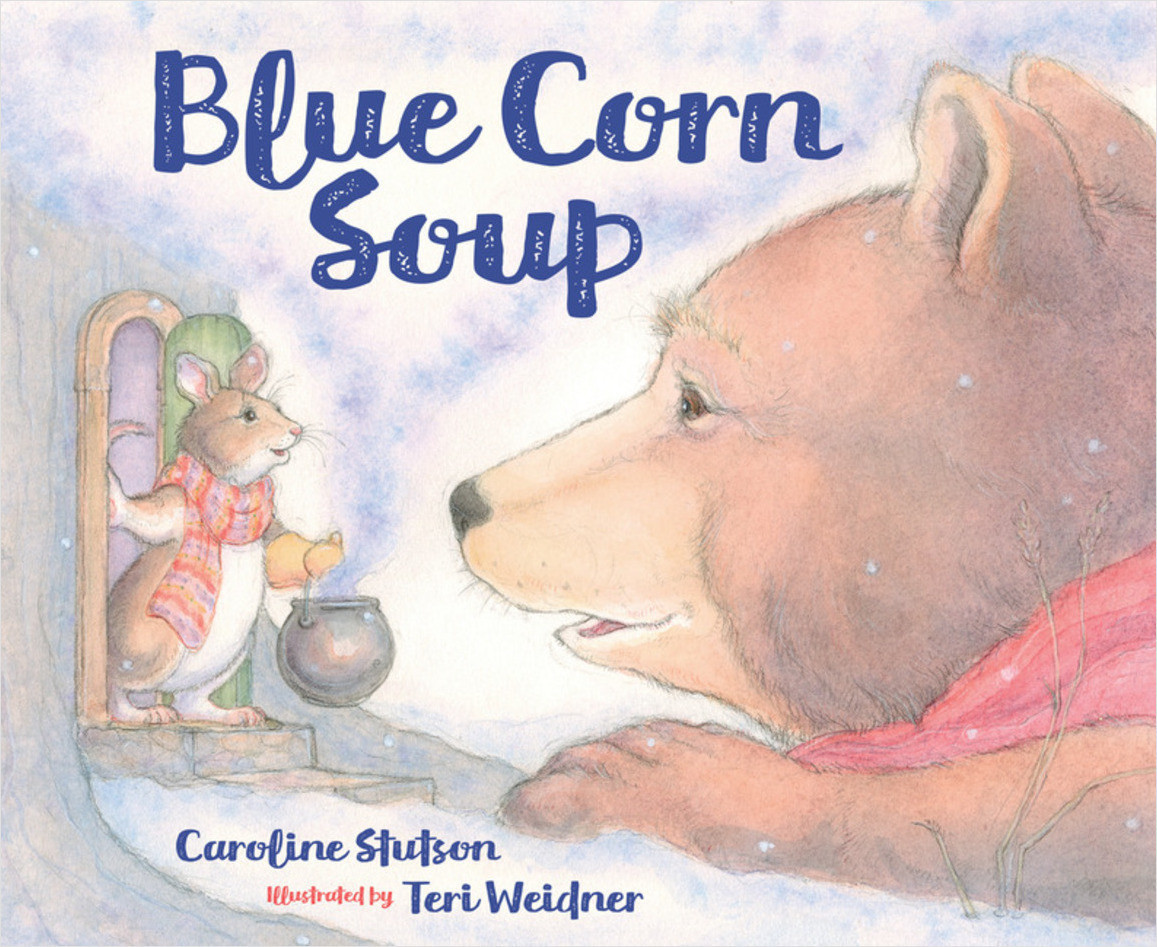 As snow begins to fall in the canyon, Mouse knows just what will keep her warm--blue corn soup. As the soup starts simmering, her neighbors catch the scent and hope to share. There isn't nearly enough blue corn soup for everyone, but Mouse has an idea that will keep them all toasty, their bellies full, and will make friends out of neighbors.

Abuelita Mouse prepares a batch of blue corn soup one wintry day. Soon, the wafting smell reaches the nearby canyon animals, each of whom wonders if sopa is on the menu. Upon reaching the mouse’s home, the animals realize there is not enough food to share on this frigid day. But Mouse has an idea: if each animal contributes something to the soup, perhaps there will be enough. Bear finds a large pumpkin, Rabbit brings a basket of potatoes, and Chipmunk happily adds in a yummy squash. When all the ingredients are mixed together, a treat is had by all. A new name is given to the sopa—Friendship Stew. Perfect for storytime because of rhyming words and refrains like “Pinyon smoke drifts through the wood. Someone’s cooking something good.” Smooth, calm illustrations match the text perfectly. A recipe for Blue Corn Soup is appended. Pair with a classic version of Stone Soup. VERDICT This tale is sure to become a time-honored read-aloud in libraries and classrooms everywhere.

On a snowy afternoon, a mouse grandmother’s cooking aromas attract the noses of her neighbors. A nice warm sopa, just enough for one, will make things cozy in Abuelita’s sagebrush house. As she cooks, stirs, tastes, and adds ingredients to her pot, the distinct smell of piñon smoke drifts through the wood. “Someone’s cooking something good.” Chipmunk, Rabbit, and Old Bear are determined to find out. “Is it sopa? Neighbors stare. / Three move closer, sniff the air.” But when Abuelita shows them her blue corn soup, the three friends can tell there is enough for only one. Not to worry; Abuelita has a plan for sharing. With each neighbor bringing the last of the fall harvest to Old Bear’s lair, the blue corn soup turns into a friendship stew for all to enjoy. Detailed illustrations drawn in graphite and watercolor washes elicit the charm of these anthropomorphic forest animals dressed in scarves, vest, and hat. The alluringly repetitive rhyme employs the motif of three and moves the story along in an engaging iteration that includes a refrain that’s altered slightly for each character. “Piñon smoke drifts through the wood. / Someone’s cooking something good. / Rabbit bounces, sniffs about. / Is it sopa? He’ll find out.” Three Spanish words—Abuelita, sopa, and amigos—sprinkled throughout are easily understood and add a Latinx flavor, though the decision to italicize the name “Abuelita” is distracting and somewhat off-putting. A mostly delectable choice for late fall/early winter readings. (recipe) (Picture book. 3-6)

Caroline Stutson is the author of more than ten picture books, including Blue Corn Soup and Cats’ Night Out. She was born in New York City and lived much of her life in beautiful Littleton, Colorado, before passing away in 2015. Caroline loved writing children’s books and mentoring young authors. When she wasn’t reading or writing, she was an enthusiastic puppeteer, a nature lover, and an active member of the Spellbinders storytelling organization, as well as the Society of Children’s Books Writers and Illustrators.

A Rhode Island School of Design graduate, Teri illustrated more than a dozen children's books, both trade and educational. She worked in watercolor, colored pencil, and a little of whatever else happened to be on her desk at the time ... cat fur included. Teri passed away in 2019. She lived in lovely Portsmouth, New Hampshire with her husband writer Chris Dahlen, their son Nicholas, Mr. Budd the cat, and several fish, all of whom served as models for her work at one point or another.