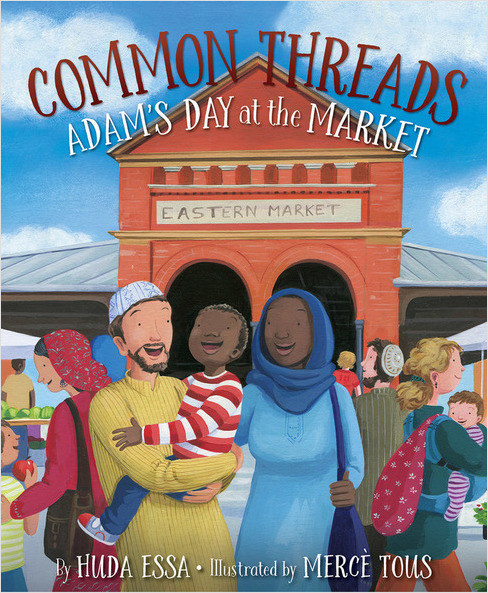 Adam's Day at the Market

Adam and his family spend an exciting day at the colorful and bustling Eastern Market. But when Adam gets briefly separated from Mom and Dad, he mistakes a friendly, diverse cast of characters for his parents in their traditional Muslim clothing--and shows that we all have more in common than you might think. This nearly-wordless picture book celebrates diversity and community in vibrant, dynamic art.

Adam and his parents are at the Eastern Market—a colorful and racially diverse, though somewhat generic, place—when he gets distracted by a bird and wanders off. He tugs on a blue dress to show his Mama but is surprised to find that the person isn’t her. Adam jogs along, searching and encountering more people who resemble but are not his parents. As his worry grows, we see that adults in the crowd are gesturing a small boy’s height and the direction in which he was last seen. Unbeknownst to Adam, people—strangers and family members alike—have been looking for him, and when they find him, they also find each other. Adam’s parents embrace the people who helped spread the word, and a community is strengthened. Common Threads, though nearly wordless, illustrates peoples’ differences and similarities and the confusion and joy both can provide. Back matter invites readers to become “cultural detectives,” to notice people’s appearances and ask respectful questions in order to learn more. Pair with Just Ask (2019) by Sonia Sotomayor.

Through his eyes, emotions, and experience, readers see how similar and connected the various shoppers and vendors are despite our apparent differences. With its vivid and detailed pictures and scant text, this book effectively portrays a culturally and religiously diverse community. Everybody can find representation of themselves in the bright pages and relate to the emotions expressed through its characters. This story will give young children an opportunity to read and tell the story that is unfolding in the pictures in their own words.

In this nearly wordless picture book, young Adam wanders away from his parents at the busy outdoor market, but diverse strangers help him find them again.Brown-skinned Adam wanders through Eastern Market with his mom, a dark-skinned woman wearing a blue hijab and long tunic, and his dad, a light-skinned man wearing a kufi and shalwar kameez. When he spots a scavenging blue jay, he follows it to watch it eat peanuts. He taps a woman from behind, asking, “Isn’t it neat, Mama?” But he is surprised when the woman turns around: Although her hair is covered and she wears a long, blue dress, it’s a kindly stranger, not his mom. Small vignettes show Adam wandering through the crowd at the adults’ waist level, repeatedly mistaking other grown-ups for his parents, often based on similar styles of dress whose variations indicate other cultures (for example, a habit, a head wrap, and a sari). As he keeps searching, the strangers begin searching for his parents too, resulting in a reunion in which all of the adults greet each other warmly. The colorful illustrations invite basic seek-and-find fun as well as offering meaning at a deeper level for readers who want to identify the cultures represented. An afterword titled “Becoming a Cultural Detective” asks readers to consider clothing as just one indication of identity and encourages cultural curiosity but does not identify the clothing and cultures in the book. A visual feast filled with food for thought.

Huda Essa has been a teacher since she was a child. Her first students were her stuffed animals. When she became a teacher as a grown up, she loved finally having human children as her students! Now, as a speaker and author, Huda is a teacher to adult humans, too. Huda’s debut book, Teach Us Your Name, and her TEDx Talk, “Your Name is the Key!” teach us to use our names to learn more about ourselves and to embrace our wonderful human diversity. Huda teaches all over the world, but lives in Michigan. You can visit her online at culturelinksllc.com or @culturelinksllc on Instagram and Twitter.

Mercè was in Barcelona, Spain, where she still lives. As a young child, she spent a lot of time drawing and painting with her grandfather, her first art teacher. She graduated from the University of Barcelona with a Fine Arts degree and continued her studies to specialize in illustration. Today, Mercè enjoys working as a freelance illustrator. When not illustrating, she likes to spend her time in nature with friends and dancing to swing and folk music.