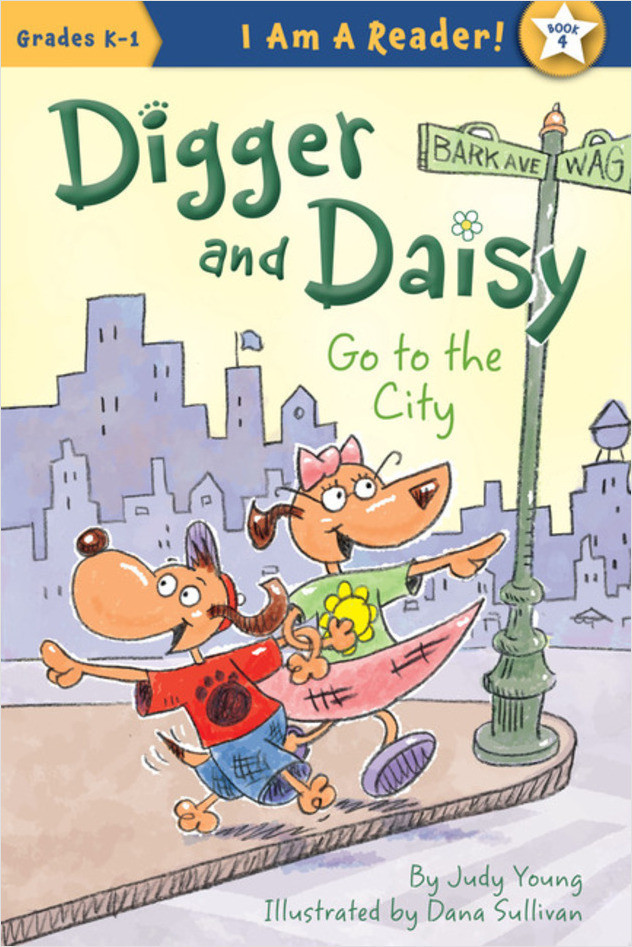 Digger and Daisy Go to the City

Meet Digger and Daisy! They are brother and sister. These dogs like to explore their world and see new things. Sometimes they agree with each other. Sometimes they disagree. But no matter the situation, one thing always stays the same--their love for each other. In playful, simple stories written especially for the K-1 audience, author Judy Young explores the dynamics and nuances of the sibling relationship. On a trip to the city Daisy gets to spend time shopping but she doesn't allow Digger to do anything, telling him he will get lost. But Digger finds a way to do what he wants.

Kirkus Reviews - Digger and Daisy Go to the City

In their fourth sibling adventure, Digger and Daisy are as fresh and curious as when readers first encountered them (Digger and Daisy Go to the Zoo, 2013); at this pace, there’ll be no issues about ever having to grow up.And, frankly, who wants them to? These two young canines—the older Daisy, in glasses and a skirt that looks like a pink banana; the younger Digger, all roving eyes and nose—are the kind who can squabble and keep it to a sentence in length, not a daylong misery. This outing is to the city, and Daisy cautions Digger (she frequently cautions Digger just before Digger sets in motion whatever she has cautioned him about) to “Stay by me.…You do not want to get lost.” This refrain is a touchstone for beginning readers and, of course, one that Digger will (almost) lose track of. Daisy wants to visit all the clothing stores—Digger offers resistance but complies—but when Digger wants to visit just one store, Daisy decides not. It is Digger’s charm to find a simple but canny way to get his satisfaction and Daisy’s to know when she has been had. Sullivan’s artwork is as affable, diverting and gumball-bright in the city as in the country. If taken to heart, a beginning reader with lasting impact.

Dana Sullivan lives near Seattle, where he loves to hike with his wife, Vicki, and dog, Bennie, when he’s not drawing or writing. He wrote and illustrated Ozzie and the Art Contest and Kay Kay’s Alphabet Safari and illustrated the Digger and Daisy early reader series. His favorite animal is the dog, and his favorite vegetable is peanut butter. Since he was a kid, he’s wanted a red velvet cape, and now he has one! See pictures of Dana in his cape and other stuff at www.danajsullivan.com.