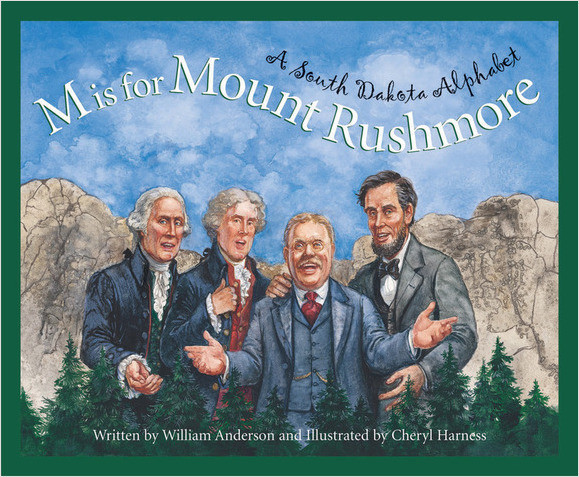 M is for Mount Rushmore

South Dakota is home to an endless supply of American history and Americana. Did you know the world's largest drug store calls Wall, SD home? Or how about the triceratops was one of the state's earliest settlers? What about the prairie the Ingalls family called home? De Smet. Also in South Dakota! The answers to all of these and many more are is the latest Sleeping Bear Press A to Z state exploration - M is for Mount Rushmore: A South Dakota Alphabet. The state's charm and significance in American folklore goes beyond those four presidents' wonderful mugs and it's all captured here in poem and expository text for citizens and tourists of all ages. M is for Mount Rushmore: A South Dakota Alphabet is a welcome addition to the Sleeping Bear Press library and is sure to find a special place in homes, schools and libraries throughout the nation. Written and illustrated by the first time pairing of children book pros, author Bill Anderson and artist Cheryl Harness, M is for Mount Rushmore is the tribute to South Dakota readers will love. Well known in South Dakota circles and the country for his Little House work, Bill brings his poignant pen to M is for Mount Rushmore and the verse and text flow with feeling and pride. And breathing life into Mr. Anderson's prose is incredible images of Cheryl Harness. Bringing years of experience and an eye for extraordinary, Cheryl's images capture the grace and wonderment that is South Dakota.

William Anderson is delighted to write about South Dakota, where his ancestors pioneered in the 1880s. A century later, he helped restore Laura Ingalls Wilder's South Dakota homes, and received the state's Robinson Award for historical writing. His books include: Laura Ingalls Wilder: A Biography; River Boy: The Story of Mark Twain; and The World of the Trapp Family. In 2002 he was invited to Laura Bush's White House conference on the frontier. M is for Mount Rushmore: A South Dakota Alphabet is his first book with Sleeping Bear Press.As a speaker, William Anderson has traveled across America. But he says his favorite summers were spent in South Dakota. His home is in Michigan, where he teaches and writes.

Since her childhood in California, Cheryl's life has been influenced by books about Laura and Mary Ingalls and Tom Sawyer and Huck Finn. She received her art-education degree from Central Missouri State University and her first job was as a theme park portrait artist. She has also designed paper goods for Hallmark and Current, and has created needlework kits and music boxes. She's sculpted, sewn (and worn) period costumes and written and/or illustrated more than 30 picture books.Cheryl lives outside the Queen City of the Trails: Independence, Missouri, with her Scottie, Maude, and two cats: Elizabeth and Merrie Emma.