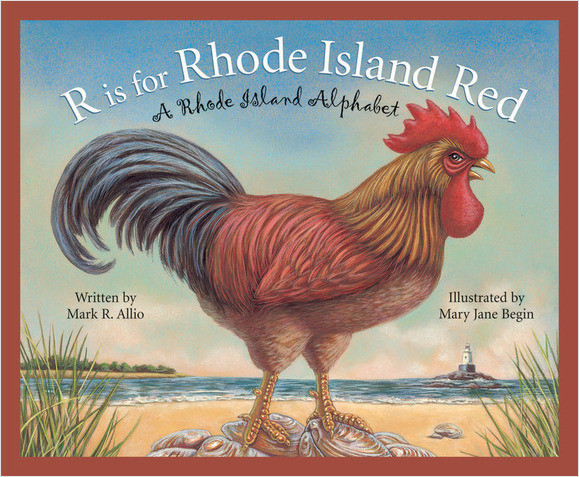 R is for Rhode Island Red

Our alphabet journey takes us next to the charming state of Rhode Island in R is for Rhode Island Red: A Rhode Island Alphabet. It may be our smallest state but its presence is unmistakable -- rich in history, breathtaking beauty, and famous for its neighborhoods filled with character. With every turned page readers will be treated to Rhode Island's incredible scenery and have their many questions answered about our thirteenth state. Rhode Island has how many miles of coastline? The breathtaking beauty of Block Island is one of the state's how many islands? Readers will also learn how Rhode Island native Samuel Slater started the American Industrial Revolution, and what the quahog is. Rhode Island Red is Mark R. Allio's first children's book. He lives in Barrington, Rhode Island. Award winning illustrator Mary Jane Begin has illustrated many children's books. She lives in Barrington, Rhode Island with her husband Mark Allio.

From the first time he went to Block Island as a teen, Mark Allio fell in love with Rhode Island. After years of visiting, he got a chance to move to Rhode Island in 1995. He lives with his wife, Mary Jane, their two children, and a yellow lab in Barrington, within view of Narragansett Bay. His interests include music and the martial arts. This is his first children's book.

Mary Jane Begin's illustrating career began as a student at the Rhode Island School of Design (RISD), where she now teaches illustration.Her award-winning children's picture book portfolio includes the recent re-release of Kenneth Grahame's classic tale The Wind in the Willows, A Mouse Told His Mother, Little Mouse's Painting, Before I Go To Sleep, The Porcupine Mouse and Jeremy's First Haircut.She has exhibited at the RISD Biennial (RI), Society of Illustrators (NY), the DeCordova Museum (MA), Books of Wonder Gallery (NY & CA), and other fine galleries nationwide. Her work has been featured in Communication Arts magazine and the Society of Illustrators Annual of American Illustration. She is the recipient of many awards, including The Steven Donahos Award and multiple Certificates of Merit from the Society of Illustrators, multiple Awards of Excellence from Communication Arts, the Critici Erba Prize at the Bologna Book Fair, Italy and First Place, Juvenile Trade, at the New York Book Show, New York.She has been a panelist and participant in numerous conferences and workshops, including the Rhode Island Festival of Children's Books and Authors, the National Family Literacy Conference, the Society of Children's Book Writers and Illustrators Conference, and the NEA Teacher's Conference. She has lectured at local elementary schools throughout Rhode Island and southern Massachusetts.Mary Jane and her author husband, Mark Allio, live in Providence, RI