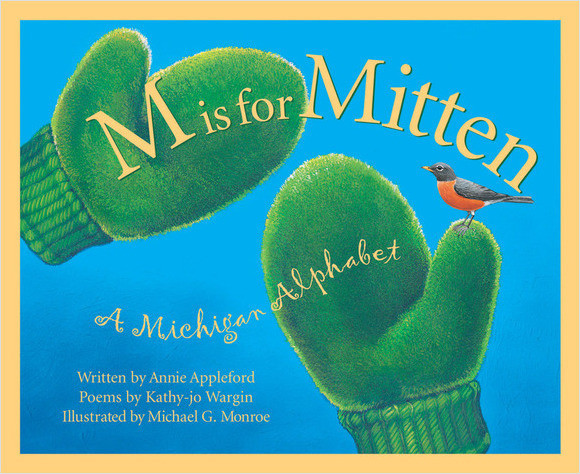 M Is For Mitten

Where was the first mile of highway paved? Who was the 38th President of the United States? What is the nation's most remote National Park? What was the first bottled soda pop in this country? Find the answers to these questions and many more in M is for Mitten: A Michigan Alphabet. Author Annie Appleford has written M is for Mitten: A Michigan Alphabet to acquaint children with the most important people, places and items that have helped mold Michigan into the tremendous state it is. Rich with gorgeous paintings by Michigan artist Michael Monroe, M is for Mitten is both educational for older children and entertaining for youngsters who will surely be dazzled by the diverse and colorful illustrations from cover to cover. Kids can climb an Evergreen tree, hop on the back of a Robin, fly with him of the Mackinac Bridge through the Upper Peninsula for a visit to Isle Royale, before going to Detroit to drink Vernor's and then to Battle Creek to eat Kellogg's cereal. They can paddle in a birch bark canoe with Native Americans in and out of our many Harbors and then head to Lansing for a visit to the Capital. M is for Mitten: A Michigan Alphabet is an all expense paid trip from shore to shore through the Great Lakes State, and you won't need a map - just look at your hand!

M is for Mitten - Teaching Guide

Annie Appleford is a lifelong resident of Michigan. Born and raised in a suburb of Detroit, she spent the summers of her youth at a family cottage on the shore of Lake Michigan.

A dedicated and ardent Michigander, Annie received her undergraduate degree from the University of Michigan and a Master of Elementary Education from Eastern Michigan University.