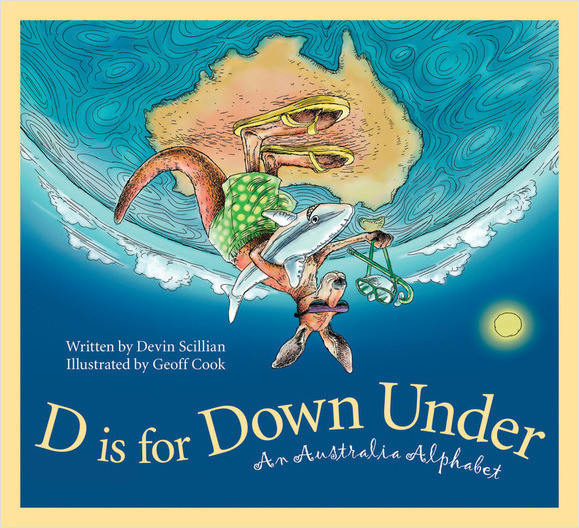 D is for Down Under

What country holds the title as the world's smallest continent and yet the world's largest island? I stands for island, but one that's not too small. Our island is enormous. Just try to see it all! There's no place else quite like it; that is clearly true. Australia is a continent, but it's an island, too. Originally founded as a penal colony, Australia has long been known for its contrasts (think: wild outback and sophisticated Sydney Opera House). Accompanied by vibrant colorful artwork, D is for Down Under: An Australia Alphabet captures the spirit of this proud country and its many treasures, natural and man-made. Visit spectacular Sydney Harbor, try your hand as a jackaroo working a sheep station, or just sit back and enjoy a Vegemite sandwich. Below the starry night glitter of the Southern Cross constellation, Australia's "down under" wonders shine brightly. Devin Scillian is an award-winning author and Emmy-award-winning broadcast journalist. His books with Sleeping Bear Press include the national bestseller A is for America: An American Alphabet. Devin lives in Michigan and anchors the news for WDIV-TV in Detroit. Geoff Cook has been illustrating for 35 years. His career began as a graphic designer, after graduating from Prahran College in Melbourne. Soon realizing he wanted to be an illustrator, he became a partner in the illustration studio All Australian Graffiti. He lives in Australia.

D is for Down Under: An Australia Alphabet - Teaching Guide

Geoff Cook has been illustrating for 35 years. His career began as agraphic designer, after graduating from Prahran College in Melbourne.Soon realizing he wanted to be an illustrator, he became a partner in theillustration studio All Australian Graffiti.