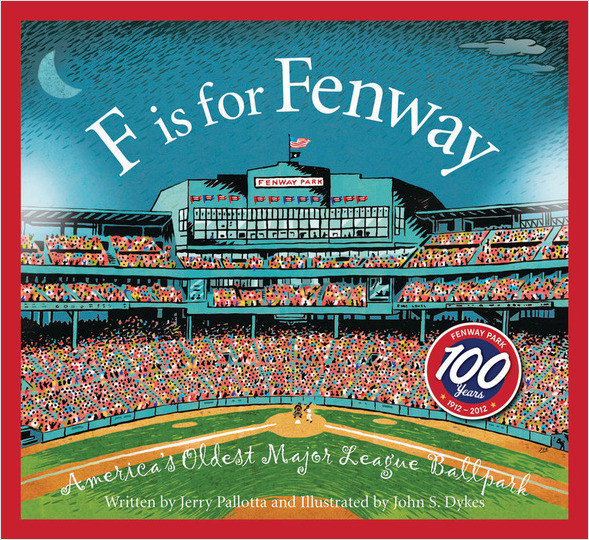 F is for Fenway

Baseball fans learn about the ballpark's history, features, and momentous events, including famous home runs from luminaries such as Ted Williams.

A Review of "F Is for Fenway Park: America's Oldest Major League Ballpark" in Booklist

Paying well-deserved tribute to 100-year-old Fenway Park—the oldest major-league park still in use—Pallotta proffers both soaring (OK, florid) verses (“It isn’t just a ballpark; it’s Boston’s sacred ground. / From the furthest bleacher seats to the pitching mound”) and side comments on the park’s features, culture, historical highlights, and a handful of its most renowned Red Sox players. Using digital media to give his art a mix of woodcut and silkscreen looks, Dykes contributes generic but bustling scenes of filled stands, crowded outside streets, and distant baseball action on the broad, grassy field. Though the ABC conceit makes for a presentation more arbitrary than logical, and he skates close to the edge of apostasy in suggesting that Ted Williams might have hit more home runs had he been a New York Yankee, Pallotta writes with such infectious enthusiasm about the Green Monster (both the wall and the mascot), the Pesky Pole, Red Sox Nation, and even the Jimmy Fund that readers will join him in appreciating and admiring all that makes Fenway a monument to the great American sport.

Jerry Pallotta, author of more than 50 children's books, visits at least 150 schools each year. His book, The Icky Bug Alphabet Book, has sold more than one million copies. He is a contributor in Jon Scieszka's book, Guys Write for Guys Read. He lives in Needham, Massachusetts.

John S. Dykes lives in Sudbury, Massachusetts. His awards include medals and recognition from the Society of Illustrators.