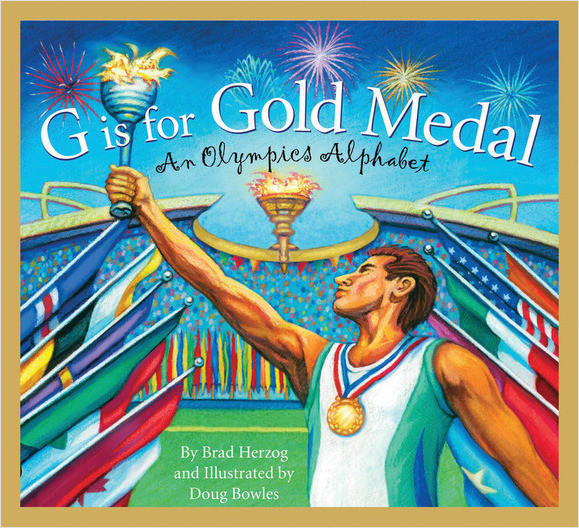 G is for Gold Medal

From the first games held in ancient Greece to the cultural extravaganzas of recent years, there have been some incredible and amazing events and milestones in the world of Olympic sports. Now in G is for Gold Medal: An Olympics Alphabet, writer Brad Herzog showcases those athletes and events that not only set sports records but also impacted history and world views. Learn the meaning behind the five interlocking rings featured on the Olympic flag. Cheer on American Jim Thorpe as he won the pentathlon and decathlon at the 1912 Olympics in Stockholm, Sweden, only to lose his medals later. Read how the man dubbed as the "world's laziest high jumper" won the gold in 1968 and later had a jump named after him. All these moments and more are brought to life in G is for Gold Medal. Brad Herzog has written travel and sports books for readers young and old. His books with Sleeping Bear include the best-selling H is for Home Run: A Baseball Alphabet. Brad lives on California's Monterey Peninsula. Doug Bowles has been a freelance illustrator for more than twenty years. His books for Sleeping Bear include One Kansas Farmer: A Kansas Number Book and S is for Sunflower: A Kansas Alphabet. Doug lives in Leawood, Kansas.

A Review of "G is for Gold Medal: An Olympics Alphabet" in Through the Looking Glass Children's Book Review

Long ago in ancient Greece, wars between the city-states were a common occurrence. The only time peace could be guaranteed was every four years, when the citizens of the city-states would lay down their arms for a month and come together to compete as athletes. The games were hosted in the town of Olympia, and the men who won the races and other events were given an olive wreath to wear.

The modern Olympic Games came into being because Baron Pierre de Coubertin felt that the “a modern version of the Olympic Games would foster peace between nations.” Because of his efforts, there has been a summer Olympic Games every four years since 1896 except in 1916, 1940, and 1944, which were, ironically, all years when the world was being torn apart by war.

In this fascinating fact-packed alphabet book, Brag Herzog tells us about the Olympic Games from A to Z. Beginning with Ancient Greece on the A page, he goes on to tells us about Baron Pierre de Coubertin on the B page. On the “C is for all the countries page,” we learn that in 2008 two hundred countries sent athletes to the Summer Olympics. Next is D for decathlete. On this page, we learn that for two days decathletes who up to the daunting task compete in ten events. These events include shot put, long jump, high jump, and running.

For each of the topics explored in this book, the author gives us a poem that introduces the subject. He supplements this with a more in-depth section of text. Young children will enjoy the hearing the poems and looking at the art, while older readers will be interested in reading the longer text sections. This format makes this book suitable for readers of all ages, from age 6 and up.

This is one of the titles in a series of alphabet books published by Sleeping Bear Press.

G is for Gold Medal: An Olympic Alphabet - Teaching Guide

Chicago native Brad Herzog's first published story was the tale of his brief stint as a big league bat boy. He has watched the Cubs play from the box seats, the bleachers, the press box, even the Wrigleyville rooftops. Among his numerous books for Sleeping Bear Press are baseball books--H is for Home Run, Full Count, Little Baseball, I Spy With My Little Eye Baseball, and W is for Wrigley: The Friendly Confines Alphabet. A multiple winner from the Council for Advancement and Support of Education, Brad has written dozens of other books about subjects ranging from soccer and small-town America to civil rights and saving the planet. He now lives on California's Monterey Peninsula with his wife, but visits schools around the country as a guest author, inspiring students about the joys of reading and writing and the possibilities of imagination.

A graduate of the Columbus College of Art & Design in Columbus, Ohio, Doug Bowles has been a freelance illustrator for 20 years. In addition to Doug's illustrations for children, he enjoys working with a wide range of clients in the advertising, corporate and editorial communities. His work has been selected many times in the Society of Illustrators West competition, and he has had several gallery showings. Doug lives in Leawood, Kansas, with his wife and two children.