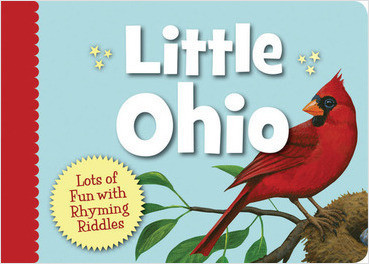 State birds, flowers, trees, and animals brought to board book form for the youngest book lovers. Toddlers will delight in this board book filled with rhyming riddles, framed by brightly painted clues that introduce elements that make Ohio so special.

Ohio native and award-winning journalist Marcia Schonberg's written more than a dozen children's books and frequently contributes to national periodicals and daily newspapers, including the Columbus Dispatch and the Medina Gazette. Marcia is an active member of the American Society of Journalists and Authors, the Ohioana Library Association, Midwest Travels Writers Association, and the Society of Children's Book Writers and Illustrators. She splits residency between Lexington, Ohio and Naples, Florida and travels extensively uncovering topics for her books and articles.