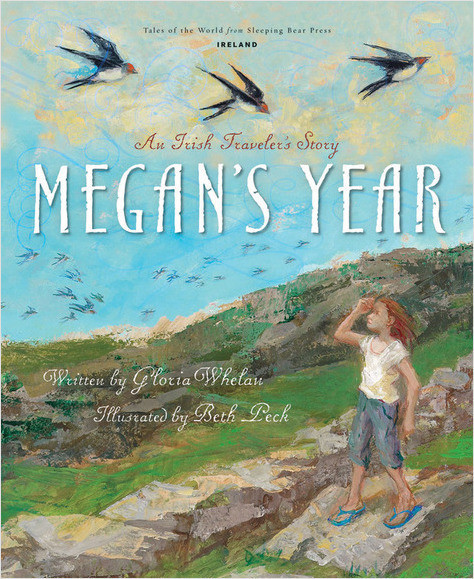 Through the voice of a young girl, the life of the people known as Irish Travelers is explored. Megan spends her summers traveling around the Irish countryside with her family. They move from place to place, hauling their camper behind their old car. But they aren't on vacation. This is their way of life. Megan and her family are Travelers. As part of their summer life, Megan's father works odd jobs, from fieldwork to roofing houses. Despite the rough living, Megan loves her life and the freedom that comes from traveling the open road. But at summer's end, when there's no more work to be had, the family moves to the city of Dublin. The camper is parked and they move into a cramped house. Megan and her siblings attend the local school as their parents struggle to make ends meet. And as the seasons pass, Megan counts down the days until she can return to her summer life. Gloria Whelan's other books in the Tales of the World series are Waiting for the Owl's Call, Yuki and the One Thousand Carriers (2008 Society of Illustrators Gold Medal winner), and Yatandou (a Junior Library Guild selection). Ms. Whelan lives in Michigan. Beth Peck earned a BFA from the Rhode Island School of Design and has illustrated many books for children, including A Christmas Memory, Just Like Josh Gibson, and Music for the End of Time. Ms. Peck lives in Menomonie, Wisconsin.

A Review of "Megan's Year: An Irish Traveler's Story" in The Children's Bookshelf

MEGAN’S YEAR: An Irish Traveler’s Story, authored by master writer Gloria Whelan and illustrated by Beth Peck, looks at the complicated life of approximately 25,000 members of the Irish Travelers who live half the year on the open road in a caravan and the other half in a stationary house called a “tigin” in a cramped area of Dublin.

Whelan’s narrator, 10 year-old Megan Brady, greatly prefers life on the road. Beth Peck’s illustrations celebrate Megan’s joy as she explores the countryside, picks raspberries, digs for potatoes and goes swimming while her Daddy helps farmers cultivate fields, and dig turf in exchange for a place to park the caravan and a chance to earn a little money. But by late fall with work opportunities very meager Megan with her family must head for the city, move into crowded housing and enroll in school.

Megan and her siblings attend St John’s National School where they are seen as different due to their lifestyle and culture. Megan is the target of name calling. Quoting from the book:" In the hall Bridget gives me a push and calls me a stupid tinker. She laughs at me because my uniform is last year’s and too short. I call Bridget a name in Gammon. Sister Joseph frowns but she doesn’t know what I’ve said."

Whelan skillfully integrates facts about the Irish Travelers into the narrative including their secret language of Gammon, their difficulty of finding a place to park their caravans due to the loss of open land and of finding farm jobs as machines take over the work. The text elegantly compares Megan’s life as a Traveler to the life of a swallow——-living in one place during the summer and in another place in the winter.

MEGAN’S YEAR: An Irish Traveler’s Story, written by Gloria Whelan and illustrated by Beth Peck, is a gentle telling of the story of a community at risk and is ideal for children 7-10 years of age (Sleeping Bear Press, 2011).

A Review of "Megan's Year: An Irish Traveler's Story" in Publishers Weekly

In this addition to the Tales of the World series, 10-year-old Megan and her family spend the summers crisscrossing Ireland in their caravan. Megan loves never knowing what her family will discover next and meeting other Travelers along the way, though she sometimes feels that her life is “too mixed up.” When the winter comes, her family heads back to Dublin, where they live in a cramped “tigin” cottage. At school, Megan is harassed by other students for her family’s nomadic lifestyle, but although her brothers want to stay in the city when they grow up, she dreams of being a Traveler for the rest of her life. Peck’s (A Nickel, a Trolley, a Treasure House) loose, smudgy paintings convey the joy and freedom of Megan’s family’s time on the road, as well as their struggles to maintain dignity while impoverished in a city “where there’s nothing to do that doesn’t cost money.” Whelan (The Listeners) offers a thought-provoking account of a treasured yet challenging way of life, and the difficulties inherent in reconciling two very different personal identities. Ages 6–10.

Beth Peck earned a BFA from the Rhode Island School of Designand has illustrated many books for children, including "A ChristmasMemory", "Just Like Josh Gibson", and "Music for the End of Time".