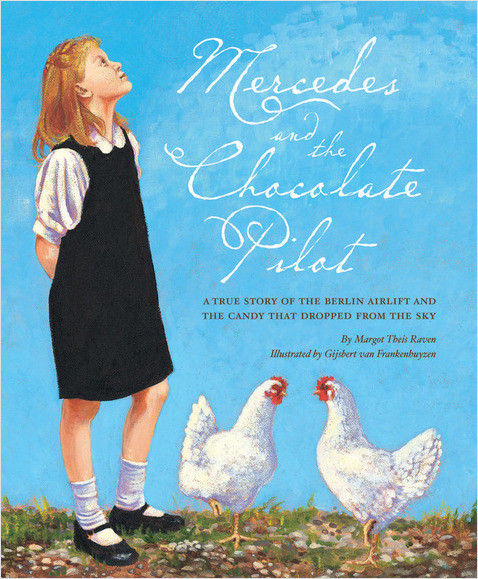 Mercedes and the Chocolate Pilot

A True Story of the Berlin Airlift and the Candy that Dropped from the Sky. Life was grim in 1948 West Berlin, Germany. Josef Stalin blockaded all ground routes coming in and out of Berlin to cut off West Berliners from all food and essential supplies. Without outside help, over 2.2 million people would die. Thus began the Berlin Airlift, a humanitarian rescue mission that utilized British and American airplanes and pilots to fly in needed supplies. As one of the American pilots participating in the Airlift mission, Lt. Gail S. Halvorsen helped to provide not only nourishment to the children but also gave them a reason to hope for a better world. From one thoughtful, generous act came a lifelong relationship between Lt. Gail and the children of Berlin. This is the true story of a seven-year-old girl named Mercedes who lived in West Berlin during the Airlift and of the American who came to be known as the Chocolate Pilot. Artist Gijsbert van Frankenhuyzen's evocative paintings illuminate Margot Theis Raven's powerful story of hope, friendship and remembrance. About the Author: Margot Theis Raven has been a professional writer working in the fields of radio, television, magazines, newspapers, and children's books for thirty years. She has won five national awards, including an IRA Teacher's Choice award. Ms. Raven earned her degree in English from Rosemont College and attended Villanova University for theater study, and Kent State University for German language. About the Illustrator: Born in the Netherlands, Gijsbert van Frankenhuyzen studied at the Royal Academy of Arts in Holland. He immigrated to the United States in 1976, and years later he became a children's book illustrator. Mercedes and the Chocolate Pilot is Nick's ninth children's book with Sleeping Bear Press.