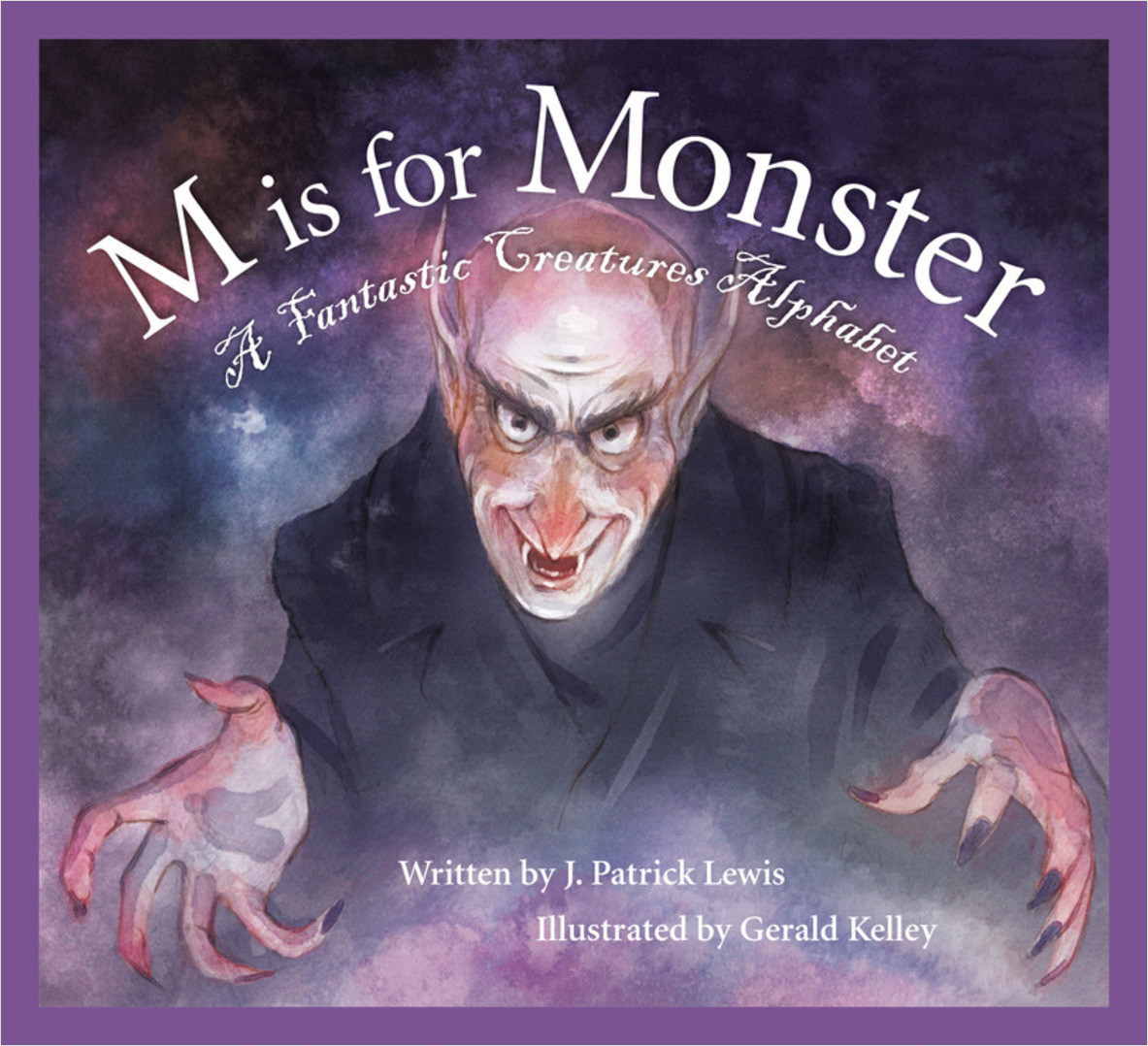 M is for Monster

Readers will meet the fascinating main characters featured in many myths and legends. Award-winning children's book author and former U.S. Children's Poet Laureate J. Patrick Lewis not only examines creatures of popular legends such as mummies, werewolves, and zombies, but he also introduces lesser-known-but-just-as-menacing monsters such as the Roc and the giant called Xing Tian. Includes origins of the Frankenstein story as well as creatures such as the Loch Ness Monster, Baba Yaga, and the Phoenix. Monster, mystery, and fantasy fans of all ages will enjoy this alphabetical tribute.

Kirkus Reviews - M is for Monster: A Fantastic Creatures Alphabet

Need an introduction to many of the creepy creatures of legends and fantasy books? Look no further—this alphabet book of monsters provides the need-to-know information. Letter by letter, former U.S. Children’s Poet Laureate Lewis announces each creature, describing it with a brief stanza. “K is for Kraken // Of all the legends of the sea, / sailors and fishermen agree / (if they lived to tell my tale!), / I could wrestle shark or whale.” Supplementing this are a few paragraphs that provide succinct information including the monster’s origins, cultural significance and other amusing facts. Lewis’ paintings are often darkly evocative and sometimes funny, rounding out the presentation. From the ubiquitous dragon, Frankenstein (both the monster and the doctor) and werewolf to the lesser-known quetzalcoatl, roc and Xing Tian (a headless giant of Chinese legend), readers will come away with a greater appreciation for the wide range of monsters—be they of the air, water or mountain—that have spooked humans for years. Readers who delve into this title will find their interests piqued; they’ll be ready to move on to other works that explore these menacing fantastical beings more fully. (Informational picture book/poetry. 6-10)

Lewis takes on a perennial favorite with his latest, a sort of monster bestiary exploring various creatures, from mythology, legend and fairy tales. Readers will find a monster for each letter of the alphabet, as well as a description, a poem, and an attractive illustration. The painterly, surreal images include details children will enjoy, such as the Loch Ness monster sneaking up behind a man in a boat, or a nervous-looking gargoyle with a mouse perched atop its head. Among the chosen creatures are the phoenix, the kraken, Baba Yaga, and, of course, the dragon. Some entries seem sketchy at first (“F for Frankenstein” refers to the monster as Frankenstein, before explaining that the name is truly that of the scientist who created him) but quickly pull together the origin of the monster’s story, well-known features, and ties to modern lore. The ogre description, for example, describes the creatures as “extremely dangerous, humanoid looking monsters that prowl woodlands in search of humans to eat,” states that they were probably created by author Charles Perrault, and says that the best-known modern example of an ogre is probably Shrek.

Publishers Weekly - M is for Monster

Former U.S. Children’s Poet Laureate Lewis introduces monsters from folklore, literature, and urban legend in this alphabetically organized book that will please lovers of the supernatural any time of year, not just at Halloween. Lewis provides brief, intriguing rhymes for the creatures, along with substantial background information about their mythological or literary origins, which appears in columns at the edge of every page or spread. Entries include Baba Yaga, a phoenix (“P is for Phoenix/ Bird from the ashes,/ bird for the ages,/ sign of renewal,/ symbol courageous”), Xing Tian (a headless immortal giant from Chinese legend), and—of course—zombies. Kelley’s handsome images vary in mood according to their subjects: a placid Loch Ness Monster comically surprises a boater who’s in the process of staging a Nessie hoax, while a “skin-walker” and the animals he embodies, glower ominously at readers with pale eyes.

J. Patrick Lewis is the author of 60 books for children, 50 of them in poetry. He is also the coauthor of three terrific children and four delightful grandchildren. He writes full-time, makes 30 elementary school visits a year, and keynotes at literature conferences. First Dog is his first book with his daughter Beth. Pat, or Grandpat, as his grandkids call him, is married and lives in Westerville, Ohio.

Gerald Kelley's work has been featured in children’s books, educational materials and short-story magazines. He illustrates for dozens of clients, including Oxford University Press, Random House and Scholastic. Knowing since he was a child that he wanted to be an illustrator when he grew up, Gerald went on to earn a degree in studio art. Still, the art of illustration has been largely self-taught and springs from his interest in visual storytelling. Gerald lives in Denver, Colorado, where he enjoys long hikes with his border collie, Scout. (But he still spends far too much time indoors.)