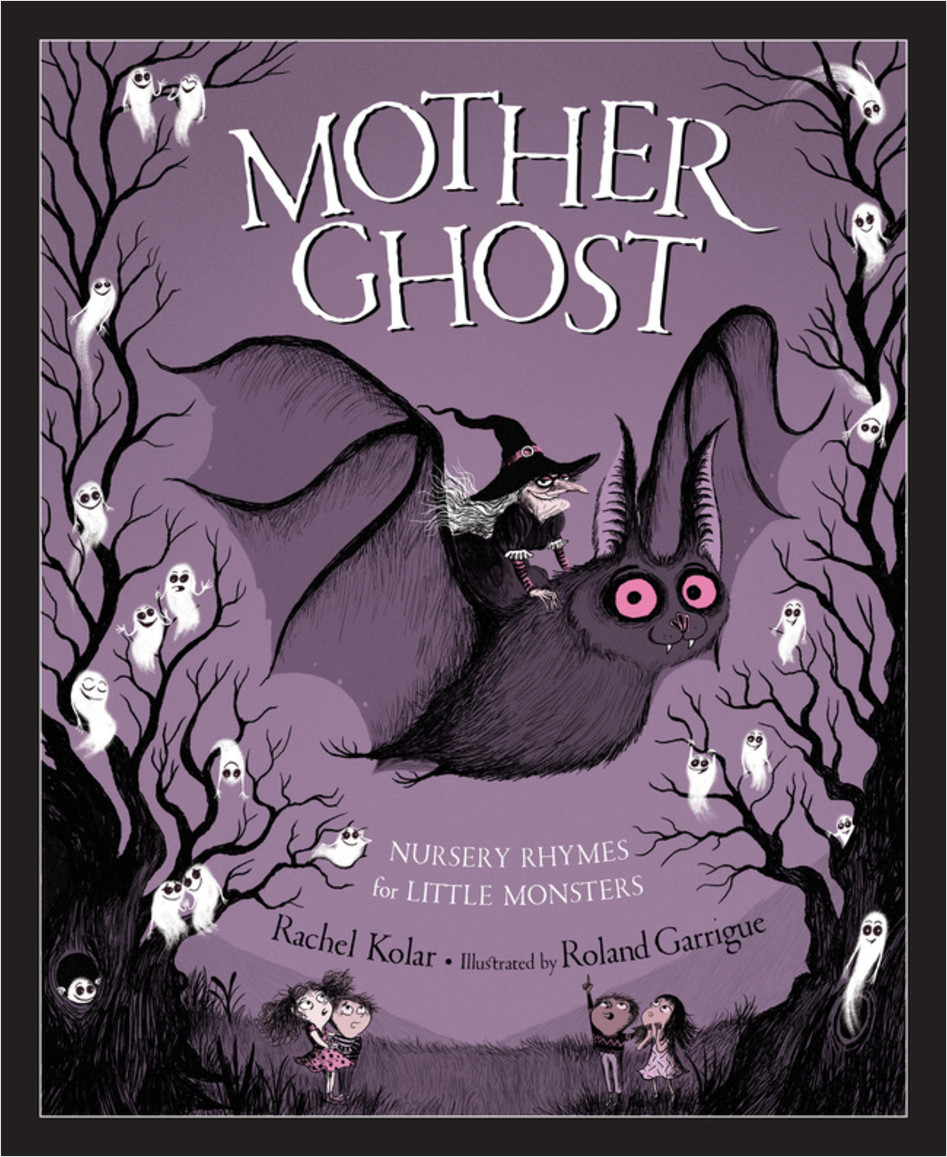 From "Mary, Mary, Tall and Scary" to "Wee Willie Werewolf," this collection of classic nursery rhymes turned on their heads will give readers the chills--and a serious case of belly laughs. With clever rhyme and spooky illustrations, Mother Ghost is perfect for getting in the Halloween spirit. Boo!

This collection of shivery Mother Goose rhymes is sure to put kids in the Halloween spirit. Opening with a spin on “Boys and Girls, Come out to Play,” Kolar sets kids up for the 12 to come: “Come with a whoop and come with a call; / Come with brave hearts or not at all.” All the favorites are here: “Mary Had a Little Ghost,” “Zombie Miss Muffet” (which doesn’t end well for the spider), “Sing a Song of Witches,” “Mary, Mary, Tall and Scary,” “Little Boy Drac.” Kolar’s scansion is spot-on with the originals, making them delicious to read aloud: “Frankenstein had a marvelous mind, / And a marvelous mind had he; / He called for some arms and he called for some eyes / And he called for his thunderbolts three.” Not all are creepy, though: “Twinkle, twinkle, lantern Jack, / Grinning orange against the black, / Crouched beneath the window light / Like a watchman in the night.” “Wee Willie Werewolf” rounds out the collection: "Growling at the window, howling to the skies, / ‘Are the monsters all in bed? The sun’s about to rise!’ " Garrigue’s appropriately spidery illustrations employ a palette that’s heavy on purple and black, and there are lots of creepy details for observant readers to spy. Of the humans/humanoids who are alive, three have brown skin, and the rest are pale; almost none have discernible chins. A treat for those who like their tricks on the scary side.

“Mary had a little ghost, / his face was white as cloud; / And everywhere that Mary went / he followed in his shroud.” This is just one of the traditional Mother Goose nursery rhymes that Kolar wickedly twists. Children and parents will cackle at rhymes like “Zombie Miss Muffet,” “Twinkle, Twinkle, Lantern Jack,”
and “Wee Willie Werewolf.” There is a delightful omnipresence of everything from goblins and ghouls to cobwebs and cauldrons. The skeletons and spiders will satisfy those looking for their share of scary, but everything is portrayed with enough humor to keep the book accessible for even trembling little monsters, and the cartoon-style illustrations are soaked in the calming lavender tones of twilight to keep the book from veering too visually dark. Plus, the ghosts are just flat-out adorable.

Kolar rewrites Mother Goose rhymes for zombie fans. From “Mary Had a Little Ghost” (“And everywhere that Mary went/ He followed in his shroud”) and “Little Boy Drac” (“Will you wake him? No, not I;/ My garlic breath will make him cry”) to “Wee Willie Werewolf,” she slips in all the Halloween ingredients she can think of and stays conscientious about rhyme and meter. French artist Garrigue (How to Ward Off Wolves) illustrates in the arch, crabbed ink-line style of Ronald Searle, giving long, pointed noses to people in photographs, and snaggly teeth and scribbly hair to a witch cooking stew (“Sing a song of witches, pocket full of sage”). He sticks to a palette of lavender and black with occasional splashes of orange and sickly green, and the illustrations supply background material such as deserted mansions and Venus flytraps. The poems may inspire kids to try their own spooky adaptations—there are an unlucky 13 nursery rhymes here, and “Jack and Jill” is still up for grabs. Ages 6–7. (July)

Rachel Kolar lives with her husband and two children in the Washington DC metro area. When she isn't writing, she enjoys playing overly complicated board games, hiking, and getting far too excited about Halloween.

Roland Garrigue is from Paris, France and is a prolific illustrator of children’s books. He loves to travel and explore foreign cities, and he hopes his stories can transport his readers to equally exciting places.