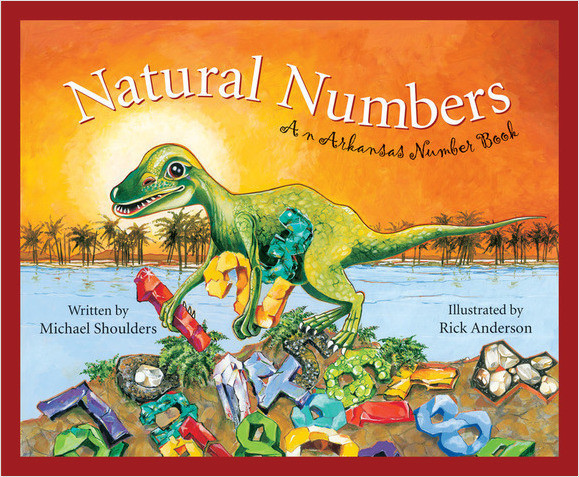 In Natural Numbers: An Arkansas Number Book readers can step back in time and see ancient cave paintings from the last Ice Age, count the thrills as they ride the rapids of White River, or add up the many ways that milk (the state drink) does a body good. Educator Michael Shoulders uses number poems and explanatory text to continue his celebration of all things "natural." Artwork from wildlife painter Rick Anderson showcases the natural beauty of state landmarks, symbols, and traditions. From number one's Pivot Rock all the way to one hundred apple blossoms, Natural Numbers shows that the great state of Arkansas has countless treasures for all to enjoy.Educator and literacy advocate Dr. Michael Shoulders has written several books for Sleeping Bear Press including the companion title, N is for Natural State: An Arkansas Alphabet and the recently released Say Daddy! When not traveling to schools and conferences, Mike lives in Clarksville, Tennessee.Natural Numbers is artist Rick Anderson's fourth book with Sleeping Bear Press. His work has been included in such prestigious juried shows as the Southern Watercolor Society and the Maryland National Waterfowl Exhibition. Rick lives in Clinton, Mississippi, and enjoys sharing his artwork with schoolchildren around the country.

Rick grew up in the Mississippi Delta where the summers are hot and long, the cotton grows waist high, the land is flat like a pancake, where the blues was born, and where southern hospitality is a virtue. Some people think that there is "magic" in the south. Whether this is true or not, it is where Rick began his love of art which continues today. After high school, he attained his master's degree in Art Education from Delta State University, and began his teaching career in 1975 in Mississippi. After teaching for 25 years, Rick retired from the classroom to continue working as a professional artist. Throughout his professional art career, Rick has exhibited throughout the United States, and has won over 150 awards in local, regional, and national exhibitions. His work is in both private and corporate collections.In 2003 Rick illustrated his first children's book, M is for Magnolia: A Mississippi Alphabet. He has gone on to publish three other titles with Sleeping Bear Press, with a fifth title in the works. Rick is also a professional speaker and literacy advocate, and he spends a lot of time presenting at schools, libraries, literacy conventions and festivals, sharing his experiences as an artist and illustrator of children's books; as well as assisting school systems developing and updating their art curriculum. He is also member of the International Reading Association. Rick lives in Clinton, Mississippi, with his wife Merrie, who is the librarian at Clinton Junior High. They have one son, Denman, a professional actor, currently residing in Washington, DC.