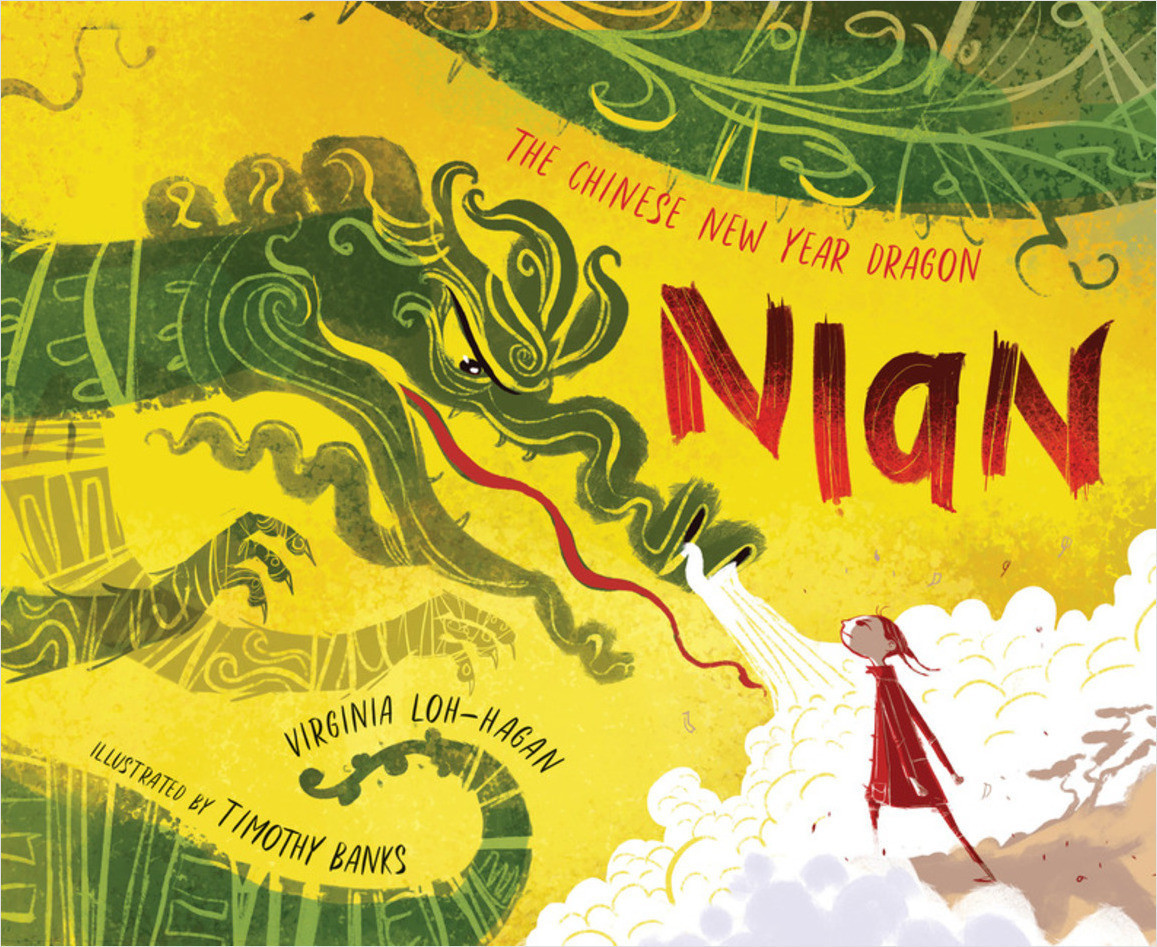 Mei hates springtime. Why? Because it's only in the spring that Nian, a fierce dragon, is able to leave his mountain prison under the sea to terrorize the local village. When the villagers hear the rumblings of Nian's hungry stomach, they know that winter has ended and spring is coming. But this year on the night before the first day of spring, a magical warrior visits Mei in her dreams. He tells Mei that it is her destiny to face and defeat Nian. But she must do it within 15 days or the dragon will be free forever. Author Virginia Loh-Hagan (PoPo's Lucky Chinese New Year) gives this retelling of the Nian legend an original twist, while explaining the origins of Chinese New Year traditions.

There are many versions of this legend to explain the meaning behind traditional Chinese New Year celebrations. Loh-Hagan makes it her own by making the hero a young girl who figures out how to defeat the dragon, and the narrative builds exciting tension as Mei saves the day. Banks’s kinetic artwork features a large (and age-appropriately scary), Chinese-style dragon. The bright red color used to frighten Nian really pops against the otherwise muted palette. VERDICT A wonderful version of a classic legend and a welcome addition to holiday collections

Green hued illustrations highlight in grand expanse the fierceness and awe of the terrorizing dragon. This traditional Chinese legend is one of many versions that presents the 15 days of the Chinese Lunar New Year celebration. End notes provide readers with greater detail about the traditions surrounding Chinese New Year.

This retelling of a Chinese legend explains why people light firecrackers, wear red, and give food offerings to celebrate Chinese New Year. In Loh-Hagan’s account, a fierce dragon named Nian ruled the land until a magical warrior’s spell forced him underground. But each spring, the spell’s strength weakens and Nian awakes to fill his empty stomach—he especially likes eating boys and girls! One night, little Mei dreams of the magical warrior, who charges her with defeating the monster. The next day, clever Mei discovers that the dragon is afraid of loud noises. She tells the villagers to bang on pans and light firecrackers, scaring the monster off. A few days later it returns, and she discovers that it is afraid of fire and the color red. She tells everyone to wear red and light lanterns. With each return of the dragon, another New Year’s tradition is explained, until finally she defeats the dragon for good. Wispy illustrations paying homage to Chinese brush painting illuminate this retelling and its spunky female lead, giving new details and a refreshing twist to a famous Chinese story. Endnotes explain more about Chinese New Year traditions but do not address why the evil monster here is a dragon when dragons in Chinese folklore are traditionally auspicious creatures. A charming retelling of a Chinese legend despite some liberties taken.

Timothy Banks is an award-winning illustrator from Charleston, South Carolina. He’s created character designs for Nike, Nickelodeon, and Cartoon Network; quirky covers for Paste magazine; and lots of children’s books with titles like There’s a Norseman in the Classroom!, A Valentine for Frankenstein, and Monsters in Charleston. He’s also had the honor of being featured in the Lürzer’s Archive “200 Best Illustrators Worldwide” list, and his work has been exhibited at the Nucleus art gallery in California. Timothy plans to spend Chinese New Year celebrating with fireworks and painting his entire studio red. You can see more of his work at timothybanks.com, or follow @timbanks on Instagram.