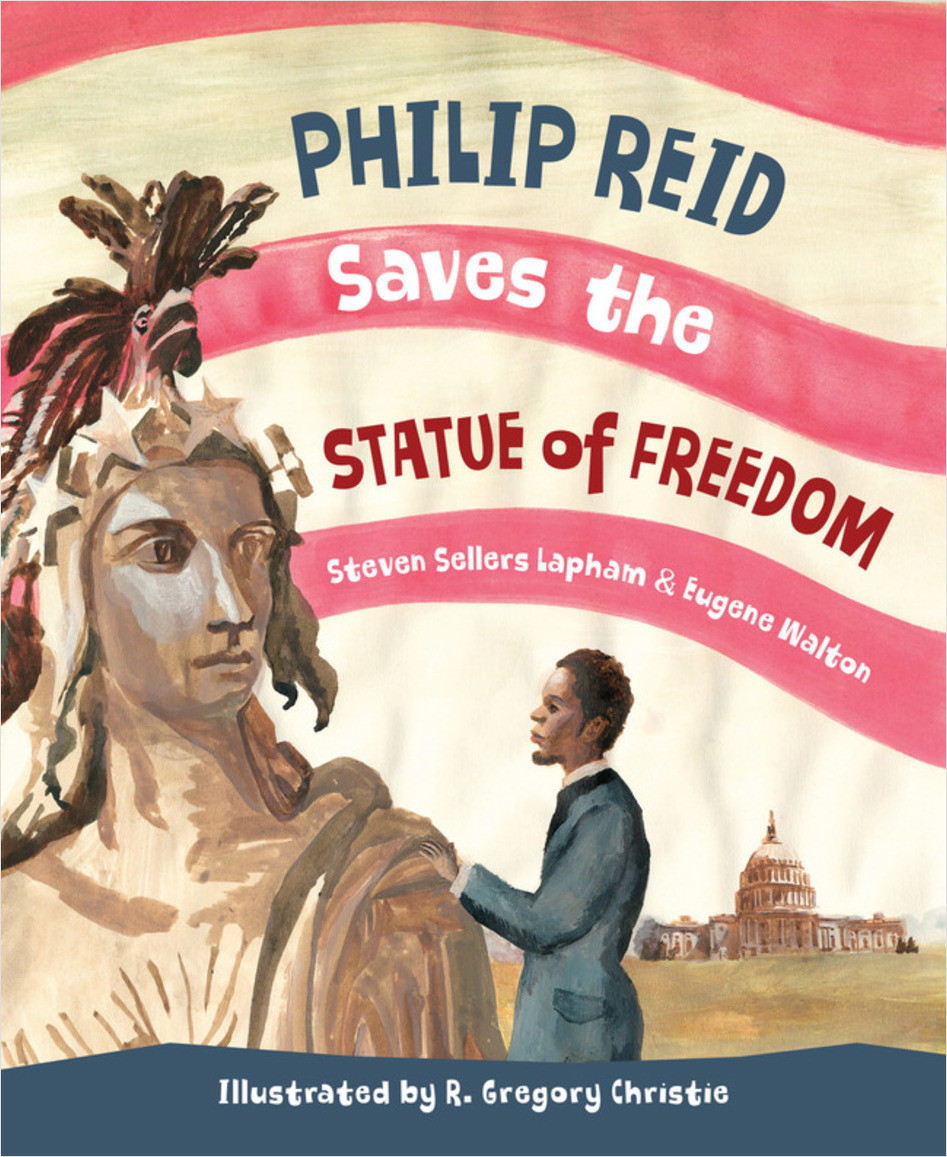 On December 2, 1863, a bronze statue was placed atop the dome of the United States Capitol. Standing more than 19 feet tall, the figure called "Freedom" was designed and created during a period of great turmoil in American history. But at one point during its creation, it wasn't clear the statue would even get to its final destination. One man, in particular, played an important role in seeing the statue through to completion. His name was Philip Reid. Born into slavery, Reid grew up on a South Carolina farm, helping various craftsmen such as the blacksmith and the potter. Eventually, he was sold to a man named Clark Mills, who opened a foundry in Washington, D.C. Mills's foundry was contracted to cast the Freedom statue, but the project was jeopardized when a seemingly unsolvable puzzle arose. And it was Philip Reid who stepped in to solve it.

The Statue of Freedom, which sits high atop the dome of the U.S. Capitol, would not be the symbol it is today without the ingenuity of an enslaved African American laborer. Philip Reid was owned by the renowned sculptor Clark Mills and by 1859 was an experienced foundry worker. When Mills was commissioned to cast Freedom in bronze, the two men retrieved the plaster model, only to be met with a conundrum. A room full of craftsmen and engineers were puzzled as to how to dismantle the plaster model for transport without cracking it, thereby making it useless and impossible to cast. Mills offered the expertise of Reid, who, through the use of a tackle and pulley, solved the problem that left so many others perplexed. He not only earned their respect but made a lasting contribution to the heritage of our nation. Commendable in its acknowledgment of the enslaved work force to which we owe much of the nation’s capital, the book nonetheless leaves readers with as many questions as answers. Primary sources are reproduced in the back matter, but they offer little insight into actual events. While directly stating that much remains unknown about Reid’s childhood, the authors still fabricate parts of the story, providing speculative assumptions on the thoughts and feelings of the individuals involved with no supportive evidence. Yet the story remains a testament to how one man’s experience and expertise in his trade can overcome social prejudice and injustice while earning the respect of peers. Christie’s striking, evocative illustrations enhance the text. For collections needing materials on themes presented herein, this is a suitable purchase, albeit secondary.

On December 2, 1863, a bronze statue called Freedom was placed atop the dome of the recently completed
U.S. Capitol Building. But how was it constructed? To answer this question, we must first begin on a
Charleston, South Carolina, farm, where a 10-year-old slave named Philip Reid works with a blacksmith
and a potter, pumping bellows and stoking the kiln. When a craftsman named Clark Mills arrives to create
a plaster molding on the walls and ceilings of Reid’s master’s home, Reid helps by holding the ladder
steady; at the end of the project, Mills buys Philip for $1,500 and makes him his assistant in his
Washington, D.C., foundry casting objects in bronze. The government hires Mills to cast the Freedom
statue, but when they arrive at the Capitol to obtain the plaster model, there’s a problem: nobody can
detect the plaster’s seams and, therefore, can’t dismantle the gigantic statue to move it. But Reid finds a
way. This book about a little-known historical figure and event includes fascinating endpapers, which are
Reid’s purchase papers, and an epilogue featuring Reid’s pay stub from the foundry ($1.25 per day).
Christie’s rich acrylic gouache illustrations evocatively convey Reid’s life as a slave and his work in the
foundry. An important piece of history for kids to know.

As a child, Reid learned to work with clay and wood from an older slave on a plantation in South Carolina. Sold to Clark Mills, a sculptor, Reid mastered the skills required to create bronze statues. When Mills was commissioned to cast the plaster mold of the Statue of Freedom in 1859, he took Reid with him. To everyone’s consternation, the plaster model was in one piece, and the Italian craftsman responsible for this wanted more money to disassemble it into its constituent parts. It was Reid who carefully determined where the seams were so that the mold could be separated and moved to a foundry to be cast. During the Civil War, the statue was placed on the Capitol dome, and slaves in the District of Columbia were granted emancipation. Paperwork from Reid’s owner requesting promised payment for his manumitted slaves is reproduced on the endpapers. Lapham and Walton invent dialogue in their narration, but they make Reid’s work exciting and provide a good picture of what little is known of him. Christie’s paintings are characteristically powerful, more impressionistic than realistic. A photograph of the statue, sources and further reading would have been a plus.
A good introduction to the growing knowledge of the vital role slaves played in building Washington, D.C. (epilogue, authors’ note) (Picture book. 4-7)

Steven Sellers Lapham grew up in Rochester, New York, and earned a BA in psychology from the University of Rochester and a master’s degree in social science from Syracuse University. He is an editor at National Council for the Social Studies, where he edits the online Middle Level Learning, among other publications. He lives in Maryland with his wife and daughter.

Dr. Walton served as Coordinator of Affirmative Action at the Library of Congress from 1973 to 1986. He has written articles for the Negro Digest and his books for adults include The Biography of Philip Reid: Historical Fiction and African Immigrants and African Americans: Community or Conflict? Following his military service in the U. S. Air Force, he was awarded a Naval Graduate Fellowship. He used this award to attend the University of Southern California, where he earned a doctorate in public administration. Soon after Dr. Walton joined the U.S. Information Agency and was assigned as Research Officer/West Africa and posted to Lagos, Nigeria from 1963 to 1965.

R. Gregory Christie currently works as an illustrator and owns and operates Gas Art Gifts, a bookstore and art studio in Decatur, Georgia. He is a two time recipient of the New York Times 10 Best Illustrated Children’s Books of the Year Award, the Boston Globe’s Horn Book Award, The NAACP’s Image Award, Once Upon a World Children’s Book Award from the Museum of Tolerance, and a three time winner of the Coretta Scott King Honor Award in Illustration. Gregory has been illustrating for more than 17 years with more than 40 books to his credit. He also enjoys teaching young people about art and literacy.