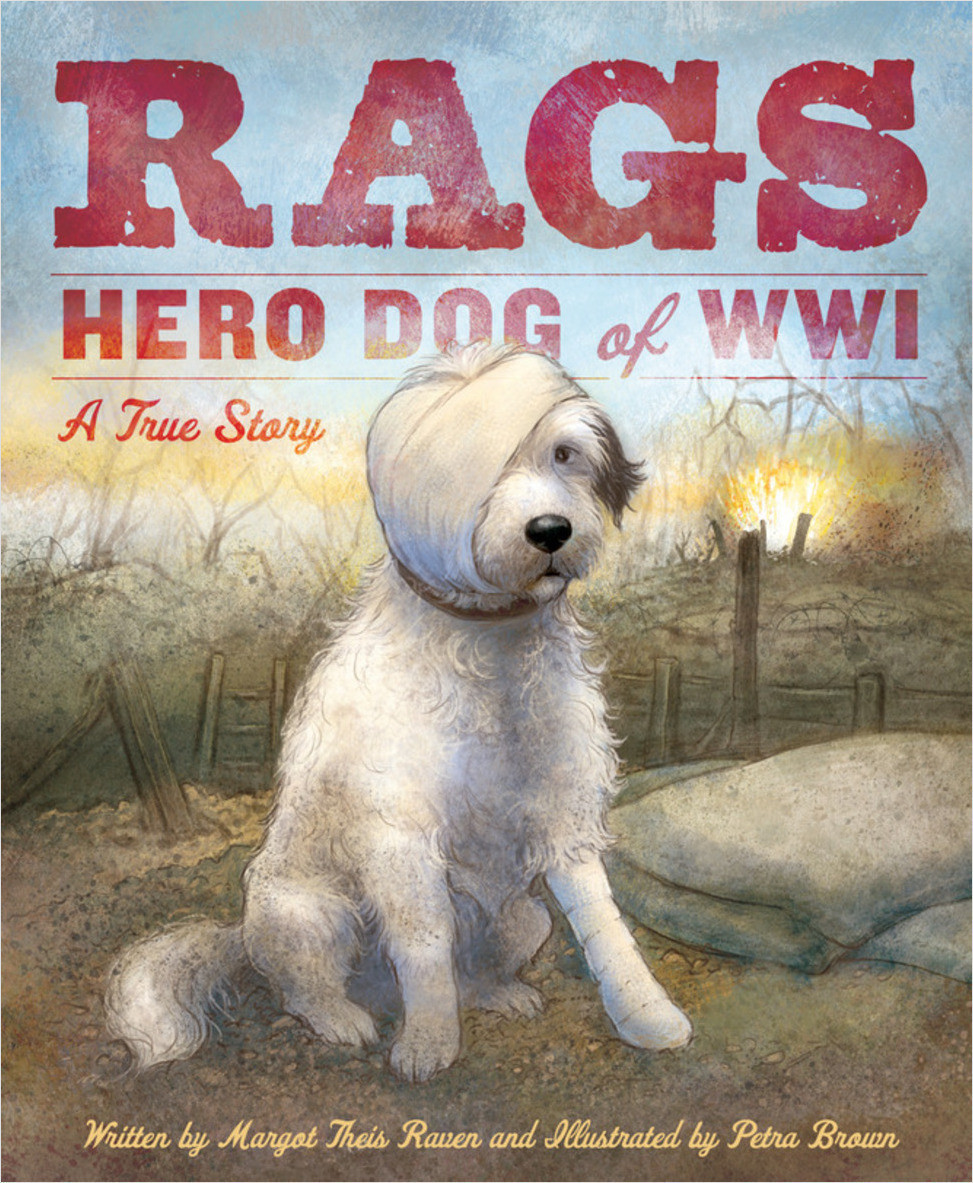 During World War I, while stationed overseas in France with the United States Army, Private James Donovan literally stumbles upon a small dog cowering on the streets of Paris. Named Rags for his disheveled appearance, the little stray quickly finds a home with Donovan and a place in his heart. Although the Army did not have an official canine division, Rags accompanies Donovan to the battlefield, making himself a useful companion delivering messages and providing a much-appreciated morale boost to the soldiers. News about Rags spreads and soon the little dog's battlefield exploits become the stuff of legend. But during a fierce battle near the end of the war, both Rags and Donovan are wounded. Severely injured, Donovan is sent back to the United States. And the little dog with the big heart refuses to leave his best friend's side.

Mirroring the similarly incredible story behind Ann Bausum’s Stubby the War Dog (2014), Raven’s look at this “small, scrappy gutter-pup” is sweet, exciting, and poignant. It was by chance that Private James Donovan of the U.S. Army’s Fightin’ First Division stepped on the stray’s paw. Donovan took Rags with him to the battlefront, and Rags, unaccustomed to kindness, leaped out the window at headquarters to join his master in the trenches. To repay Donovan’s companionship and sharing of rations, Rags chased trench rats, warned soldiers of incoming shells, bit an enemy soldier, and, most important, transported “Go Find”messages that Donovan tucked into his collar. An October 1918 attack injured both man and mutt, and though Rags was left with permanent disabilities, he stayed with his friend until Donovan died from his wounds. Raven’s clear, emotional prose does not delve much into WWI history, but Brown’s grungy, textured art—especially tender when depicting Rags’ makeshift gas mask—provides all the context that readers will need.

A scrawny mutt is rescued in Paris by an American soldier during WWI, and the smart, intuitive Rags becomes a wartime hero. The true story of the dog’s wartime service is told in dramatic style, with plenty of conflict on Parisian streets and on the battlefields of France. James Donovan, the private who rescues Rags, trains the dog to sniff out breaks in underground telephone lines and to deliver messages during combat. Both Donovan and Rags are injured in battle, and the faithful dog stays with Donovan in the hospital until the soldier’s death. An epilogue gives the story of the rest of the dog’s life with a military family in the United States. The story occasionally veers into overly emotional language and attributes anthropomorphic thoughts and emotions to the brilliant canine—an unnecessary choice given the inherent drama of the story. The book’s value is significantly elevated by superb illustrations in a muted palette of browns and grays, effectively bringing the efforts of the talented dog to life.

Gr 1–4—This heartfelt story introduces a heroic and lovable dog that was found in a Paris doorway by an American soldier during World War I. Private James Donovan and Rags became fast friends, and Rags was whisked off into U.S. Army service, where he learned to root out rats and mice from the trenches, transport important messages across the battlefield, and even to salute his superiors. The picture-book format and accessible narrative make for excellent storytime sharing. There has been a spate of books about dogs serving in wars recently, including Sheila Keenan’s graphic novel Dogs of War (Scholastic, 2013) and Ann Bausum’s Stubby the War Dog (National Geographic, 2014), both for slightly older students and offering more context and historical information. Rags is a fine introduction to the notion of dogs being included in military service for younger elementary students. The artwork is lively and sweet, with a soft palette of colors depicting many of the scenes. It breathes life into the text and creates an endearing character in Rags. An epilogue and author’s note add some detail to the story, but no bibliographic or source information is included. Share this title with dog lovers and young history buffs, who will enjoy the combination.—Jody Kopple, Shady Hill School, Cambridge, MA

Petra Brown has been a children's book illustrator since 2006 when her first picture book If Big Can...I Can, was shortlisted for the Booktrust Early Years Awards for Best Emerging Illustrator. Since then she has been illustrating for a range of publishers in the United Kingdom and abroad. Petra comments, "I love drawing animals with human expressions. I find it such fun creating, for example, a thoughtful fox, a happy hippo, a shy sheep, or a caring bear! The other thing I like is creating landscapes, places where my characters can run about and have adventures. Living in a magnificent place like Snowdonia helps a great deal." Petra lives with her partner in Wales.