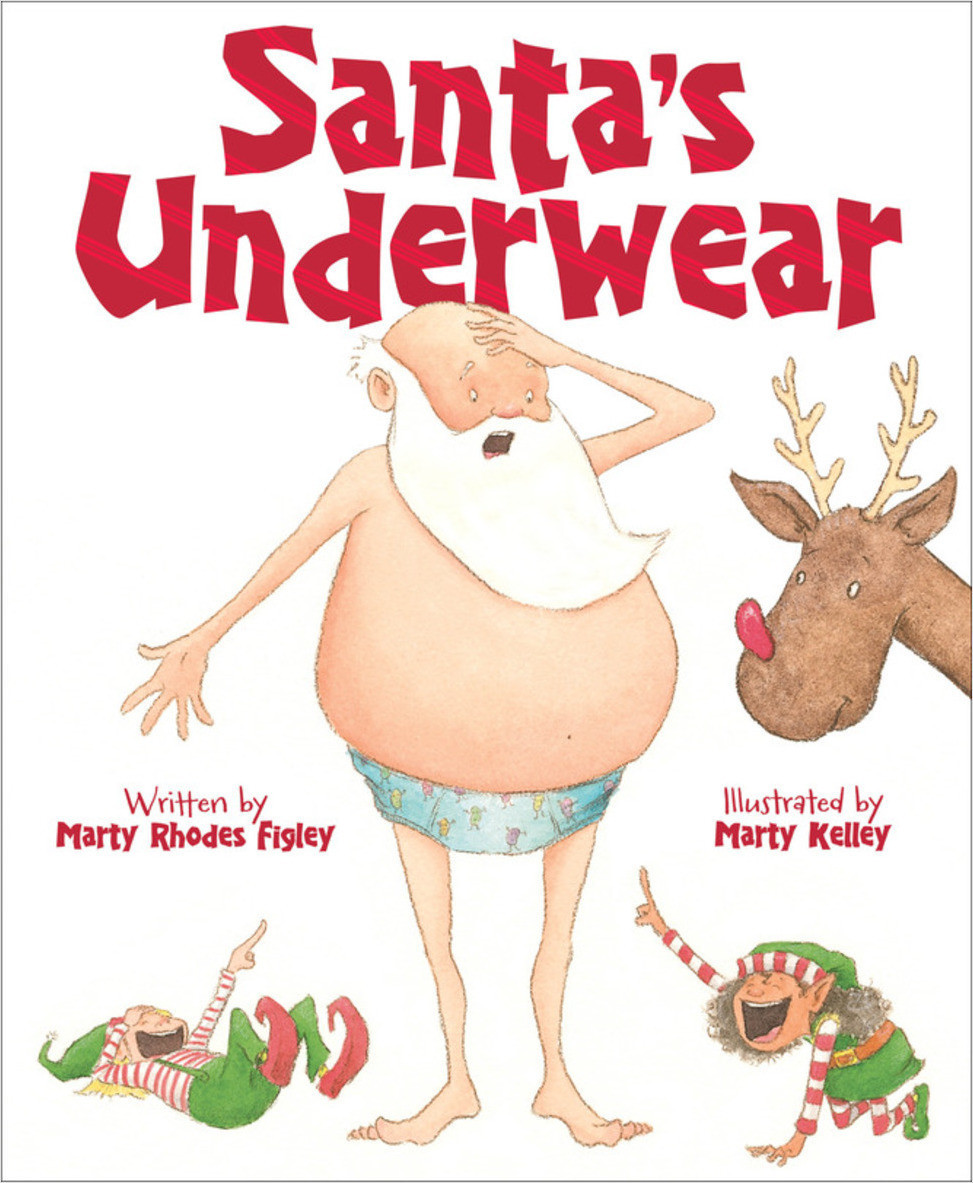 It's Christmas Eve and Santa is busy getting gussied up for the big night. But when he goes to put on his warm, cozy (holey, ragged) Christmas underwear, they're nowhere to be found! With undies for every occasion, he tries on the rest of his collection. But nothing is quite right. Just when he's about to give up he find a surprise from his considerate team of reindeer. Ho, ho, ho, Merry Christmas!

Santa’s red suit is a classic, but what about what’s underneath? In Figley’s (Emily and Carlo) lighthearted holiday outing, Santa can’t find the “long, red, woolly undies” that he wears each Christmas Eve, so he has to explore other options. Kelley (Albert’s Almost Amazing Adventure) emphasizes the elves’ amused reactions as Santa tries on his pink Valentine’s Day boxers, St. Patrick’s Day long johns, Easter briefs, and Thanksgiving tighty-whities that “were now a little too tighty.” He even contemplates going commando, and Kelley sends the elves diving in front of Santa to protect his modesty. A surprise gift from Santa’s reindeer saves the day—and frees up his other underwear for them to wear during their midnight flight. On their own, Santa and underwear are generally picture book winners; together, they’ll keep kids plenty amused—and hoping their own Christmas gifts don’t include much underwear.

There’s nothing like underwear jokes to get kids giggling, and this funny story focuses on Santa’s entire underwear collection and which set he will wear on Christmas Eve.The cover shows a nearly nude white Santa displaying his rotund belly and a too-small pair of turquoise undies, with two elves laughing hysterically. The story opens on Christmas Eve with Santa eating a healthy dinner, taking a bath, and combing his long, snow-white beard. He is assisted at every step by a crew of cute elves in green and candy-cane-striped suits, his helpers including both elves of color and female elves. (Hurray for elf equality!) Trouble ensues when Santa can’t find his favorite set of “old, faded, and saggy” long underwear and finally decides on his green, shamrock-sprinkled long johns. When he opens his closet to put on his red suit, he finds a new set of bright red long underwear, a Christmas gift from his reindeer. Rudolph can be spotted in several illustrations setting up this surprise for Santa. The slight mystery is well-paced, and the different sets of underwear set up some laughter, along with the cavorting elves. Soft-focus illustrations in watercolor and pencil are mostly full-page in size, making this a fine choice for reading aloud to a group. A troupe of entertaining elves, a jolly Santa, and lots of underwear jokes add up to Christmas chuckles in this engaging story.

Marty Rhodes Figley is the author of numerous books for young readers including The Schoolchildren’s Blizzard and Emily and Carlo. A grandmother of five, the idea for Santa’s Underwear came about when one of her grandchildren asked her, “Does Santa wear underpants?” The question resulted in much laughter, and Marty knew that was a question she had to answer. She now lives with her husband, Paul, and their Airedale terrier, Scarlett, in Annandale, Virginia, a suburb of Washington, D.C.

Marty Kelley is an author and illustrator of children’s books but has, in the past, been a second grade teacher, a baker, a cartoonist, a newspaper art director, and (among other things) a drummer in a heavy metal band. He lives in New Hampshire with his wife and children.