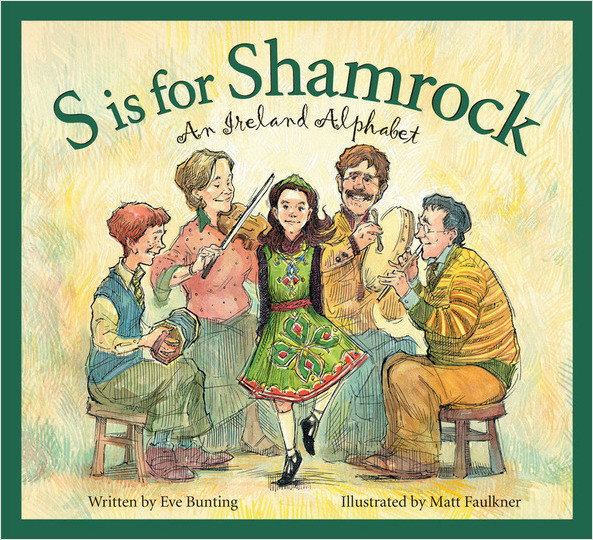 S is for Shamrock

Small in size (less than 400 by 200 miles) the country of Ireland holds a big place in world and human history. And many from around the globe proudly lay claim to ancestral ties there. S is for Shamrock: An Ireland Alphabet gives readers a guided A-Z tour of this small island country whose influence extends far beyond its sea borders. Famous landmarks such as the Blarney Stone and Finn McCool's Giant Causeway speak to the land and history that shaped Ireland and its inhabitants. The prose and poetry of Eve Bunting, Irish native and children's book author, bring the magic and mystery, character and culture of the Emerald Isle to vivid life.To find recipes, games, interactives maps and much more for this title visit www.discovertheworldbooks.com! Author Eve Bunting's many honors include a Special Achievement Award from PEN International for her contribution to children's literature. In 2002 she was chosen to be Irish-American Woman of the Year by the Irish American Heritage Committee of New York. Ms. Bunting lives in Pasadena, California. Matt Faulkner also illustrated The Night Henry Ford Met Santa. Awriter and illustrator of numerous children's books, Matt is also a contributing illustrator to national publications such as the New York Times and the Wall Street Journal. He lives in California.

S is for Shamrock: An Ireland Alphabet - Teaching Guide

Eve Bunting was born in a little town in Ireland called Maghera and she was brought up in the tradition of storytelling. Her mother started a library in their house and there were always books available to read. Most were poetry, which Eve loved. She also loved ghost stories and adventure stories; actually stories of all kinds. So she grew up, got married, had three children, and became a storyteller herself.

Now Eve lives in California and writes books that tell stories. She has written a lot of books, more than 250, and hopes to write many more. Because storytelling is what she does. And what she loves to do.

Matt Faulkner has written and illustrated a number of children's books. His work has won wide praise for its humor, exuberance, and sensitivity. He is also a contributing illustrator to such national periodicals as The New York Times, The Wall Street Journal and Forbes. Matt lives with his son, Gabe and their three cats on a little island in San Francisco Bay (no, not Alcatraz).