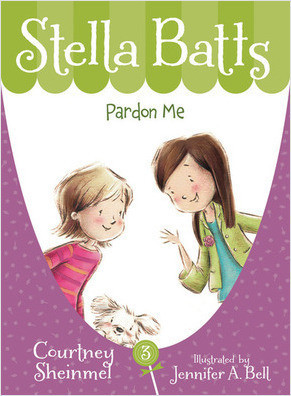 In Pardon Me, Stella needs to find a new best friend after her friend, Willa, moves away. But finding a new best friend is not easy. Things are looking up when she meets Evie, the new girl in town. She is going to be in Stella's class at school and she needs a new best friend too. Stella can't wait to introduce her to the other third graders. Except when they get to school, things don't exactly go the way Stella planned.

A Review of "Pardon Me" in Kirkus Reviews

Back for her third outing, Stella reports, “If you write at least three books that are all connected then you have a series.”

All is not well for Stella: Her BFF has moved far away, leaving a serious sense of loneliness and loss, which is made all the worse when she calls Willa and her friend won’t talk to her. Dispirited, Stella sets her heart on a Maltese puppy at the pet shop near her father’s candy store, even though her mother doesn’t want a dog. Then she’s forced to befriend a new girl in town, Evie, but once she gets comfortable with that idea, the girl inexplicably seems to reject her after they become classmates. Stella faces problems that lots of girls newly transitioning to chapter books will recognize. Her humor-tinged first-person voice and usually upbeat attitude seem just right for her age, capturing the pain of growing up but also affirming the optimistic competence of young grade-schoolers as they encounter conflicts and learn to resolve them. Supportive, wise parents complete the calmly predictable picture of Stella’s middle-class life.

Not much happens to Stella, but she’s fun to spend some time with, and now that she’s successfully authored her own whole series, that’ll be possible. (Fiction. 5-9)