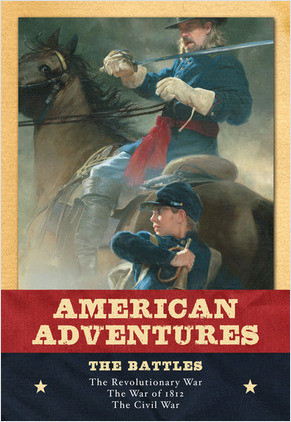 Each paperback in this series features a trio of fictional stories highlighting a moment in history, with content taken from our popular Tales of Young Americans picture-book series. The Battles contains three stories focusing on key American battles: the Revolutionary War, the War of 1812, and the Civil War. The Scarlet Stockings Spy is set during the Revolutionary War. In Philadelphia 1777, childhood games now become life-and-death actions for Maddy Rose and her Patriot soldier brother, as British spies are everywhere. In The Town that Fooled the British, the War of 1812 comes to life when the British target St. Michaels, Maryland, in their campaign to defeat America. But a young boy's quick thinking helps the town escape destruction. The Last Brother is set on the battlefields of Gettysburg where Gabe, a Union Army bugler, meets and befriends Orlee, a young Confederate bugler. Now, with the battle looming ahead of him, Gabe is conflicted about what to do.

This colorfully illustrated paperback from the American Adventures series presents stories in which children make contributions to American wars. Each selection is based on a picture book by the same name from the publisher’s Tales of Young Americans series. Noble’s “The Scarlet Stockings Spy” concerns Maddy Rose, a Philadelphia girl whose clothesline code informs her brother (a spy in Washington’s nearby army) about British ships in the harbor. In Papp’s “The Town That Fooled the British,” young Henry’s idea saves his Maryland town during the War of 1812. “The Last Brother,” a Civil War tale by Noble, tells of an 11-year-old bugler at the Battle of Gettysburg. Sometimes dramatic and occasionally poignant, the stories are always accessible. The illustrations use light and color dramatically while sometimes depicting faces with near-photographic realism. The title and cover art will help this short story collection find its audience. A second volume in the series, Westward Journeys, was published simultaneously.

Born and raised in Iowa and Nebraska, Lisa Papp attended Iowa State University College of Design for one year, and studied three more years at Du Cret School for the Arts in New Jersey where she won numerous awards for her watercolor paintings. “I am lucky to illustrate. It gives me a chance to dream and see it come to life. Nature has always been a friend to me and continues to be one of my best inspirers.” Lisa currently resides in historic Bucks County, Pennsylvania, with her artist husband, Rob, and their whimsical cat, Taffy.