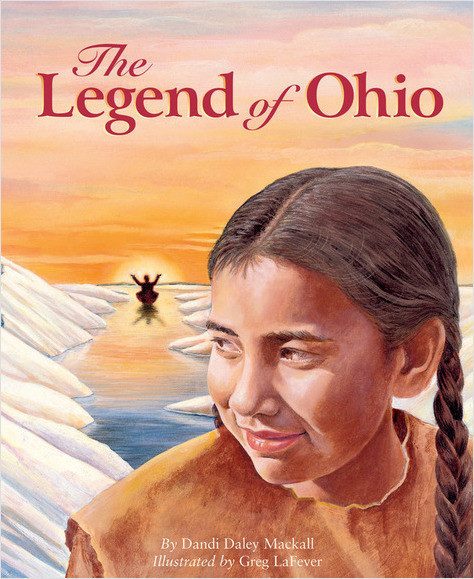 The Legend of Ohio

Young Dikewamis and her family are forced to keep moving as the "moving stone mountains" creep closer and closer to their village, driving away the bison and deer, turning the waters to ice, and hardening the earth, making it impossible to grow food. Their Chief, Tarachiawagon, has had a vision in which he sees fingers of water in a bountiful land. Thus he calls his people to embark upon a journey. The long, arduous trip will test the faith of many, including Dikewamis, but ultimately, it will lead their people to a new land. They will call this land Ohio, named for the many rivers that cross it -- the fingers of water Tarachiawagon saw in his dreams. Ohio means "beautiful river", and today we know that it has more than 25,000 miles of rivers and streams. Dandi Daley Mackall has authored over 350 books for children and adults, with sales of 3 million in 22 countries. Although she has always been interested in Native American culture and history (with the rumor of a distant Native American branch in her own family tree), The Legend of Ohio is her first Native American legend. She lives in rural Ohio. Illustrator Greg LaFever's career spans 25 years. His impressive client list boasts such names as Kenner Toys, Owens Corning, and Busch Gardens, among many others. The Legend of Ohio is his first children's book. Greg lives with his family in Oxford, Ohio.

Gregory LaFever has been a freelance illustrator since the last glacier slid across Ohio. When he isn't coaching Little League baseball or mowing the back forty, he's creating illustrations for advertising agencies, publishing companies and magazines. The Legend of Ohio is Greg's first book for Sleeping Bear Press.