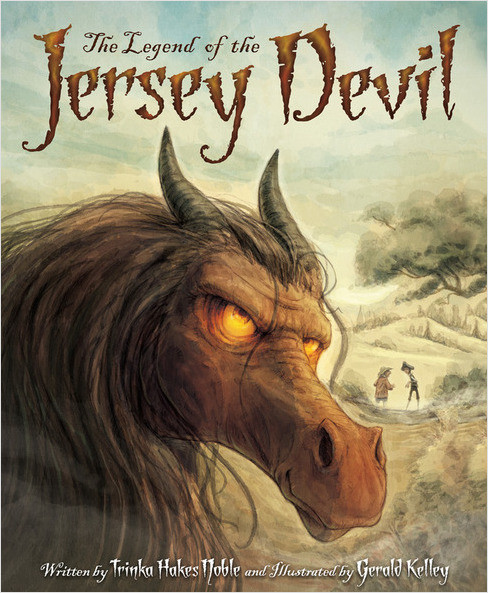 The Legend of the Jersey Devil

The Pine Barrens region in New Jersey has long been a place of mystery, with its dark pine groves, black swamps, and dank bogs, oftentimes shrouded in mist and fog. Reputed to be haunted by spirits, it's an unsettling place to be sure. But of all the mysterious happenings and sights to be found in the Pine Barrens, there is none so intriguing as the Jersey Devil. Since its first reported sighting in 1735, local lore has it that a "devil-like" creature with the head of a horse, the wings of a bat, and the hooves of a goat has menaced townspeople, frightened livestock, and caused all manner of trouble over the years. Is the Jersey Devil real? Award-winning author Trinka Hakes Noble weaves a spellbinding tale about the origins of the legend of the Jersey Devil. Atmospheric illustrations by artist Gerald Kelley bring the tale to spooky life.

School Library Journal Reviews "The Legend of the Jersey Devil"

Legend has it that Mother Leeds gave birth to the Jersey Devil, her monstrous 13th child, on a Halloween night some 300 years ago. The Devil, complete with a forked tail, the hooves of a goat, horns growing out of its head, bat’s wings, and glowing eyes, is said to haunt the Pine Barrens of southern New Jersey, frightening lone travelers and livestock, souring milk, and stealing pies. Noble does a capable job of capturing the atmosphere of the setting, with its black swamps and murky bogs. She conveys enough of the details of the Devil’s alleged activities to make the tale deliciously spooky, omitting some of the more grisly possibilities. Kelley reinforces the spookiness with effective use of light and shadow, although his people too often verge on cartoon caricature, so that facial expressions that are supposed to reflect fear and terror seem laughable instead. There is little available for this age group on this folklore character, making this is a serviceable addition for those feeling the need to have him represented in their collections. There are no source notes.

Booklist Online Reviews "The Legend of the Jersey Devil"

The source of countless stories, movies, and TV show episodes, the Jersey Devil is one of those creatures cryptozoologists can never quite pin down—though few of its origin stories are as delectable as this one, supposedly told in the Pine Barrens area for nearly 300 years. It’s 1735, almost Halloween, and rumored witch Mother Leeds is giving birth to her thirteenth child. “Oh let it be a devil!” she screams. Like that, a hideous creature with a forked tail is born and goes darting up the chimney. Soon it is being blamed for all sorts of local misfortune, and breathless sightings of a flying, horse-headed beast become rampant. “Devil hunters” arrive to make the bounty offered for the monster and are only dispatched by the Devil when the townsfolk agree to accept the abomination as their own. Much like the story of Sleepy Hollow, the folktale’s plotlessness contributes to its authenticity and spookiness, and Kelley’s scarily exaggerated, underlit, and perpetually frightened villagers make nicely fearful foes for our fire-breathing beast. Ideal for Halloween.

Kirkus Reviews "The Legend of the Jersey Devil"

From a state rife with disreputable characters, Noble here depicts perhaps its most otherworldly resident, the Jersey Devil, whose existence dates back to colonial folklore of 1735. On an archetypally dark and stormy night in the remote Pine Barrens, a coastal region distinguished by “black swamps and murky bogs” fed by brackish water, as Mother Leeds is in labor with her 13th child, she curses, “Oh let it be a devil!” With requisite lightning and thunderclap, she gets her wish: A monstrous creature—with a horse’s head, horns, bat wings, cloven hooves, forked tail and glowing eyes, and capable of breathing fire—is born, destined by its parenting and chimeric looks to become an outcast. Kelley’s arresting watercolors heighten the ghoulish drama, with vivid facial expressions and atmospheric tendrils of lightning and mist. From a callous mother who doesn’t want her child and a town that reviles difference to a scheming preacher, businessmen and bounty hunters looking to profit from a freak of nature, Noble’s mythological subject must struggle to overcome humanity at its worst, blending psychology with the stuff of ghastly legend. Overcome it he does, eventually winning the hearts of the people of the Pine Barrens, who adopt him for their own.

Gerald Kelley's work has been featured in children’s books, educational materials and short-story magazines. He illustrates for dozens of clients, including Oxford University Press, Random House and Scholastic. Knowing since he was a child that he wanted to be an illustrator when he grew up, Gerald went on to earn a degree in studio art. Still, the art of illustration has been largely self-taught and springs from his interest in visual storytelling. Gerald lives in Denver, Colorado, where he enjoys long hikes with his border collie, Scout. (But he still spends far too much time indoors.)