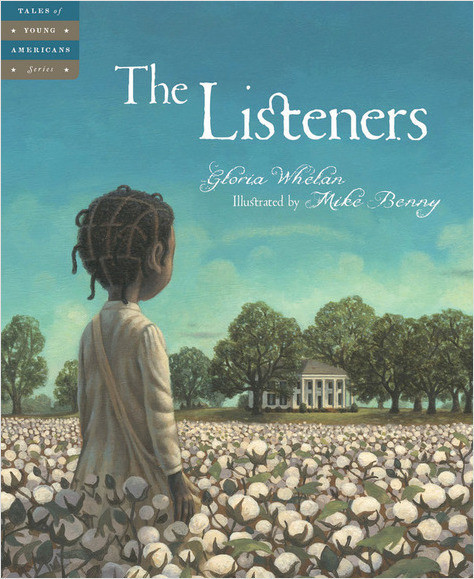 Ella May lives on a plantation but she doesn't live in the great house. She is a slave. It's dark in the morning when Ella May heads to the fields to pick cotton. And it's sunset when she comes home. But her day isn't done, not yet. Ella May still has important work to do. She's got to listen. Each night Ella May and her friends secretly listen outside the windows of their master's house. The children listen in the hopes of gleaning information about their fates and those of their loved ones. Who will be sold? Who will stay? The lives of slaves depended on the inclinations of their owners. They had no control over their daily lives or futures. But they could dream. And when the promise of freedom appears on the horizon, the children are the first to hear it. Gloria Whelan's other titles in the Tales of Young Americans series include Friend on Freedom River (Jefferson Cup honor book) and Mackinac Bridge: The Story of the Five-Mile Poem (2007 Michigan Notable Book). Ms. Whelan lives in Michigan. Mike Benny's illustrations have appeared in Time, GQ, and The New Yorker magazines. His awards include three gold and two silver medals from the Society of Illustrators. He also illustrated America's White Table. Mike lives in Austin, Texas.

Mike Benny's illustrations have appeared in Time, GQ, The New Yorker, and Sports Illustrated magazines. His awards include three gold and two silver medals from the Society of Illustrators. Mike lives in Austin, Texas, with his wife, Mary Ann, and children, Adele and Hank. The Listeners is his second book with Sleeping Bear Press. He also illustrated America's White Table, written by Margot Theis Raven, and Oh, Brother, written by Nikki Grimes and published by HarperCollins.