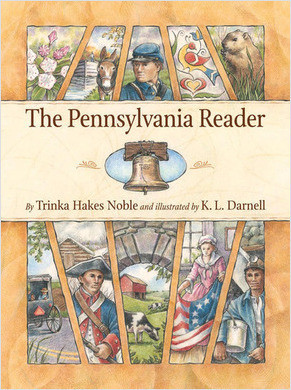 Trinka Hakes Noble, the author of One for All: A Pennsylvania Number Book, continues her celebration of the Keystone State in The Pennsylvania Reader. Oh, Pennsylvania, how we praise thee, Land where the Quakers came to be free. Independence for all was your decree, When your famous bell rang for Liberty. Topics included are the history behind the state name (Penn's Woods), state symbols, distinguished citizens (Daniel Boone and Betsy Ross), and famous events (the reading of the Gettysburg Address). Original fiction such as a correspondence between cousins on either side of the Mason-Dixon Line and a Reader Theater drama provide ample opportunity for student/classroom interaction.

Artist Kate Darnell has been drawing for as long as she can remember and even after 20 years of doing it, is thrilled each day to be making her living at what she loves most to do—drawing pictures. She earned her BFA studying drawing and painting at the University of Michigan School of Art and Design. In addition to her freelance career as an illustrator and calligrapher, she is a part-time instructor of art at Lansing Community College. Her art has been described as "making you want to slow down and look." Her intricate drawings are achieved through many layers of tiny colored pencil marks on vellum paper. She lives in East Lansing with her husband and daughter.