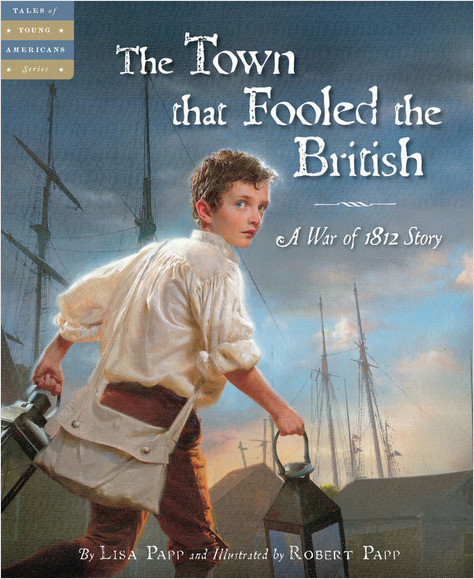 The Town that Fooled the British

St. Michaels, Maryland, is a town of shipbuilders whose reputation for crafting powerful schooners carries far beyond the shores of young America. And once the War of 1812 starts, that's not necessarily a good thing. For the British have targeted the town as part of their campaign to defeat America in its fight to maintain its independence. And now, in August of 1813 the British fleet is sailing up the Chesapeake River to St. Michaels. The town's militia is assembled but no one expects they can win the fight against the powerful British cannons. Citizens are being evacuated and the town is in turmoil. All young Henry Middle wants to do is find his father amid the chaos of the coming attack. The lanterns he carries will be of use to the militia. As Henry works to conquer his rising fear, he realizes he may hold the answer to outsmarting the British in his very hands. Lisa Papp studied at Iowa State University College of Design and at Du Cret School for the Arts. The Town that Fooled the British marks her authorial debut. Lisa illustrated the Pennsylvania number book, One for All, and collaborated with husband Rob on P is for Princess: A Royal Alphabet. Robert Papp's award-winning artwork includes hundreds of illustrations for major publishers. His first children's book, The Scarlet Stockings Spy, was named an IRA Teachers' Choice. His other books include The Last Brother and M is for Meow: A Cat Alphabet. Rob and Lisa live in Bucks County, Pennsylvania.

The Town That Fooled the British: A War of 1812 Story" is a historic reconstruction tale from the Tales of Young Americans series, introducing the character of young Henry Middle, a fictional but realistically based hero from St. Michaels, Maryland, a town of shipbuilders. The mighty British navy fleet sails up the Chesapeake River determined to destroy the shipbuilding town. What can one boy do to help a town of shipbuilders outsmart the British? In this American David and Goliath tale, the American creators of the Baltimore Clippers prepare to flee the threatened attack of the dreaded British fleet. The time is the summer of 1813. Henry’s mother is a nurse, and the family decides to stay hidden in their cellar to help care for the wounded. Henry takes two lanterns intending to deliver them to his father, who serves in the town militia. The town’s militia dreads the British cannons’ attack, and the gunmen who will come ashore. But a rainstorm with fog can help to turn the tide for the American town, if they will listen to young Henry’s inspired idea to hang the lanterns high in the trees to fool the oncoming British ships and cannons. “The Town That Fooled the British” is based on a historical event. To pique young readers’ curiosity about the significance of their nations’ history, Tales of Young Americans will hopefully continue to produce inspiring literary offerings appealing to children ages 6-10.

The Town That Fooled the British: A War of 1812 Story - Teaching Guide

Born and raised in Iowa and Nebraska, Lisa Papp attended Iowa State University College of Design for one year, and studied three more years at Du Cret School for the Arts in New Jersey where she won numerous awards for her watercolor paintings. “I am lucky to illustrate. It gives me a chance to dream and see it come to life. Nature has always been a friend to me and continues to be one of my best inspirers.” Lisa currently resides in historic Bucks County, Pennsylvania, with her artist husband, Rob, and their whimsical cat, Taffy.