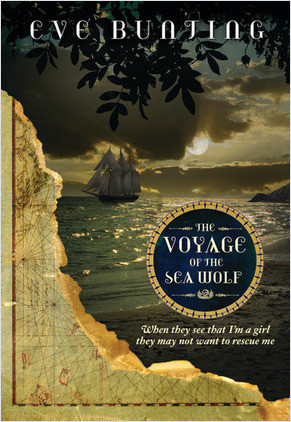 The Voyage of the Sea Wolf

At the end of The Pirate Captain's Daughter, Catherine and cabin boy William are marooned on Pox Island by the murderous crew of the pirate ship Reprisal. The young lovers see no hope of escape. In Voyage of the Sea Wolf, the continuing saga of Catherine's sea adventures, she and William are rescured from their island prison by the Sea Wolf, a pirate ship pursuing the Reprisal. Catherine worries that these new pirates will send her back to the island once they discover she's a girl. But then, she meets the captain of the Sea Wolf. A Woman! Surely, Catherine thinks, the bloodshed and brutality she and William experienced aboard the Reprisal can't happen again, especially under the leadership of a female captian. But just as things seem to be going their way, the captain takes a liking to William. Catherine is forbidden to see him. If Catherine and William want to stay together, they must find a way to now escape from the Sea Wolf.

Gr 5-7–Marooned on an island in The Pirate Captain’s Daughter (Sleeping Bear, 2011), Catherine and William are rescued by the pirate crew of the Sea Wolf at the start of this story. The two lovers vow to stay together, but they are not prepared for what awaits them. Catherine is surprised to discover that the ship’s captain is a woman, and even more surprised that she takes a liking to William. When she finds out that the previously disguised Catherine is a girl, Captain Medb Moriarty forbids the two to have any contact, and locks Catherine in her quarters with her at night. Moriarty has her sights set on plundering two other pirate ships–Catherine’s former ship The Reprisal and the bountiful Isabella–and she intends to make William her partner. Catherine is desperate to escape with William, but she fears that he’s having second thoughts about his feelings for her. She spends her days mending sails alongside the friendly dwarf Sebastian, pining for William and thwarting the unwanted advances of lecherous Magruder. Catherine finally finds her strength when the Sea Wolf comes upon the beached–and presumably abandoned–Isabella and she must rescue William after a bloody surprise attack. A quick read for fans of pirate tales.

Ahoy ye mateys! Clamber on board the Sea Wolf for a salty adventure.

As the first in Bunting’s new series ended, 15-year-old Catherine, The Pirate Captain’s Daughter (2011), had been marooned on a desolate island with William, cabin boy and love of her young life, and the situation was looking grim. They’re rather fortuitously rescued by the Sea Wolf, captained by superstitious red-haired pirate Medb, a spirited and domineering woman. Medb is immediately smitten with William and determines to claim him as her own, whether or not the young lovers agree. Sebastian, the captain’s wily assistant, comes to Catherine’s aid, but the situation is still fraught with peril as they sail off toward a confrontation with a treasure ship. Like the first in the series, this effort is plot driven, but there’s enough lusty adventure to sustain those pirate fans who may find Catherine’s introspective yearning for William an unnecessary distraction from swashbuckling. It’s a swift read with a strong female protagonist, a bit of romance and plenty of action. The grittiness of the situation is both informative and a bit disgusting: The pirates, for example, have a handy restroom—they haul themselves out over the sea in a net that features conveniently placed hole. Aye, tis true.

“Listen now, ye belly-whackers,” pirate fans are sure to savor this seafaring adventure and crave another in the series. (Historical fiction. 10-14)

Eve Bunting was born in a little town in Ireland called Maghera and she was brought up in the tradition of storytelling. Her mother started a library in their house and there were always books available to read. Most were poetry, which Eve loved. She also loved ghost stories and adventure stories; actually stories of all kinds. So she grew up, got married, had three children, and became a storyteller herself.

Now Eve lives in California and writes books that tell stories. She has written a lot of books, more than 250, and hopes to write many more. Because storytelling is what she does. And what she loves to do.