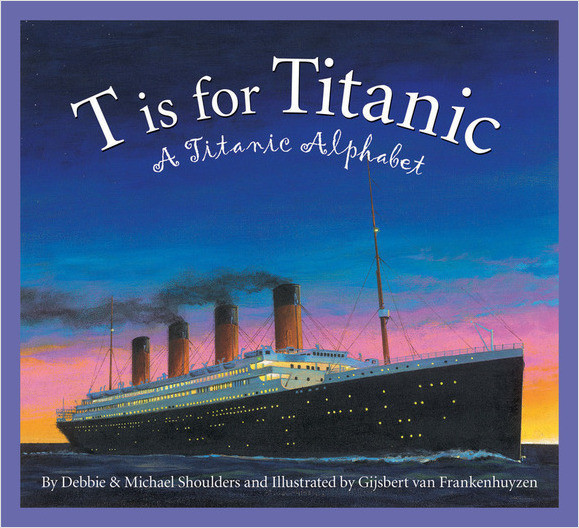 T is for Titanic

In T is for Titanic, husband-and-wife writing team Michael and Debbie Shoulders sift through the stories, documents, and artifacts surronding the famous ship, giving a you-are-there view to one of the greatest disaster stories.

A Review of "T Is for Titanic: A Titanic Alphabet" in School Library Journal

Gr 2-4–This alphabet book provides introductory information about the ship itself, the people associated with it, and a very basic outline of the events surrounding that fateful night in April 1912. Each page includes a short, rhyming poem, a piece of original artwork, and several paragraphs that flesh out some details, from the Marconi operators who sent out the distress signals, to the dogs that also traveled aboard the ship. The writing is succinct and to the point, offering up conventionally accepted facts that cover a broad swath of territory about the Titanic but leave the depth of knowledge and discussion of more controversial topics to titles for older students. The realistic paintings take up three quarters of each page and provide a helpful visual accompaniment to the text. A solid introduction for young readers.

T is for Titanic: A Titanic Alphabet - Teaching Guide