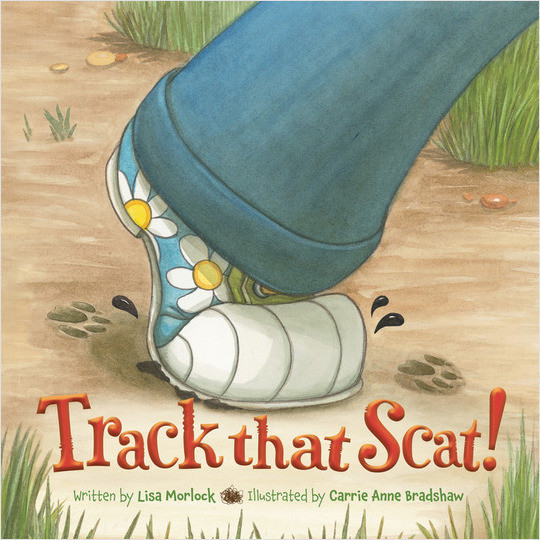 When Finn and her dog Skeeter set out on a hike to cure their restless feet, they literally take a step into nature. A big gooey step...right into scat (also known as poop). And just like the animal it comes from, scat comes in all shapes and sizes. Scat, along with foot or paw tracks, can tell a lot about the creature who produced it. As Finn's hike takes her further into the woods, she happens along some scat and tracks from a variety of woodland creatures. Pairing punchy rhyme with science writing, Lisa Morlock has created the perfect nature guide, providing detailed descriptions of the prints, diets, and behaviors of the animals that Finn and Skeeter encounter along their hike. Watch your step!

A Review of "Track That Scat!" in Publishers Weekly

Stepping in animal poop is rarely cause for celebration, but it is for a girl named Finn in a story that invokes not one, not two, but three meanings of the word “scat.” On a wildlife walk with her basset hound, Finn introduces her brand-new sneakers to a potpourri of animal scat: “Three-toed web prints grouped together./ Nearby floats a long tail feather./ With one trop-plop, Finn’s foot goes splat./ Oh no! She steps into… goose scat!” Morlock describes each animal’s habits and excrement in (extremely) detailed paragraphs: “Rabbits eat their own poop. When the scat comes out the first time, it’s in soft, moist pellets.” In addition to Bradshaw’s more fancifully painted spreads, the animals’ tracks and scat are depicted as they might appear in an animal identification guide. Nature-minded readers who are more careful than Finn about watching where they step will find plenty of information about what animals leave on the forest floor. Ages 4–8.

A Review of "Track that Scat!" in The Midwest Book Review

Track that Scat! is a picturebook about discovering the traces of common woodland creatures, including rabbits, chickadees, red foxes, and Canada geese. A young girl and her faithful dog venture on a woodland hike, and observe the tracks and feces of different animals (sometimes the girl accidentally steps in the scat – good thing she’s wearing boots)! Each two-page spread features a colorful picture of an animal, rhyming read-aloud story text up top, and a brief educational section of text at the bottom, including silhouettes of each animal’s types of tracks and waste. An educational, nature-minded storybook, Track that Scat! is just plain fun to read aloud, provided that neither the parents nor the children are squeamish about what animals do in the woods!

A Review of "Track That Scat!" in Booklist

For young Finn and her hound, Skeeter, exploring the outdoors becomes a somewhat pungent adventure and a vehicle to introduce readers to identifying commonly known animals through their tracks and, particularly, droppings. From the onset, the pair encounters—and sometimes steps in—a progression of animal excrement: “With one trip-slip, Finn’s foot goes splat. Oh no! Right into . . . rabbit scat!” Further encounters include goose, raccoon, and bird poop. Back at home, Finn’s nose-pinching mom discovers the source of the horrendous smell: Finn’s footwear. This picture book’s bouncy rhymes, humor and puns, and colorful, cartoonish illustrations keep things on the lighter side. Straightforward supplemental information on each animal relates characteristics and behaviors while also further detailing track traits and scat habits. The squeamish might balk at times (rabbits “eat their own poop”; skunk scat can have “insect wings, legs, and other parts sticking out”), and some may wonder why Finn doesn’t become more observant about where she treads. A preface includes definitions of the word scat.

Lisa Morlock works as a writer and educator in the Midwest. She’s freelanced for Meredith Corporation’s Better Homes and Gardens and Parents online, and she’s edited curriculum materials for Perfection Learning Corporation. In addition to writing, she’s taught secondary language arts classes, college composition, and staff development workshops. For even more fun, Lisa enjoys spending the weekends wading through marsh water and pawing up creek banks with her family.

Carrie Anne Bradshaw is an alumnus of The Academy of Art in San Francisco, where she earned her master’s degree in illustration. Her work is often described as expressive, warm, and witty.