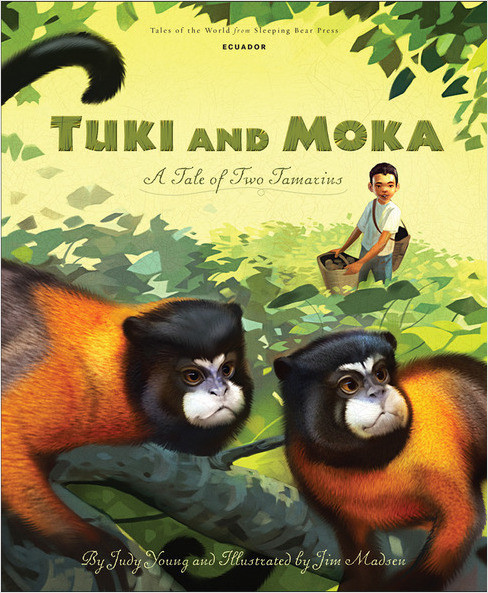 A Tale of Two Tamarins

Eduardo and his family live in a small town in Ecuador, not far from the Amazon rainforest. The rainforest is an important part of their lives. Each month Eduardo and his father travel by river from their town to the rainforest. There, using just a basket and a machete, they gather Brazil nuts. They are castañeros and this is how they earn their living. But the rainforest is not only important to the castañeros; it is home to many exotic species of plants, birds, and mammals, including two playful tamarins that Eduardo has named Tuki and Moka. So although it is difficult work being a castañero, Eduardo looks forward to his visits to the rainforest so he can play with his two friends. But one night, the peace of the forest is threatened by poachers, animal traffickers who illegally capture and then try to sell some of the birds and animals. Can Eduardo save his friends?

Eduardo and his father are castañeros, traveling from their small town in Ecuador up the river to gather Brazil nuts in the Amazonian rain forest. The boy enjoys these trips despite the dangers and befriends some macaws and two playful tamarins, Tuki and Moka. One night, traffickers capture the colorful birds and furry mammals. Upon returning to their village, Eduardo sees the poachers ready to load the stolen animals onto a truck and manages to engineer an escape for them. This story would be best shared in a group setting where there is ample opportunity to discuss the ethics of animal poaching and when it is appropriate for kids to take matters into their own hands. Madsen’s images capture the lush beauty of the South American locale, although the illustrations of the human characters have a CGI quality.

When animal hijackers capture his favorite tamarins, a young boy living near the Amazon rain forest in Ecuador comes to the rescue in this latest in the Tales of the World series.

Traveling by river to their camp in the rain forest, Eduardo and his father earn their living as castañeros, gathering heavy pods from Brazil nut trees and chopping them to collect the nuts. Eduardo has bonded with two playful tamarins called Tuki and Moko and a family of scarlet macaws that nest near the camp. The morning Eduardo and his father return to town with a boatload of nuts, they find the macaws, Tuki and Moko missing. Eduardo’s father suspects animal poachers. When Eduardo arrives at the town market, he follows the sound of familiar chattering into a tent where he discovers Tuki, Moko and macaws in cages and must use his wits to free them. With its pedagogical focus, the text touches on Brazil nut harvesting, unique rain-forest animals and rare-animal trafficking, and the author’s note elaborates on each. Smooth, photorealistic illustrations appear digitally rendered and effectively capture the drama of the rain forest and its verdant flora and exotic fauna through an arresting use of light, shadow, color and perspective.

Jim Madsen has been illustrating children's books and educational software for more than twenty years. He has illustrated more than 75 books over this period of time. Jim is a graduate of Brigham Young University and lives in Provo, Utah, with his wife, Holly, and their three children. When he's not coloring pictures, he can be found hiking and breathing the fresh air of the Wasatch Front mountain range.