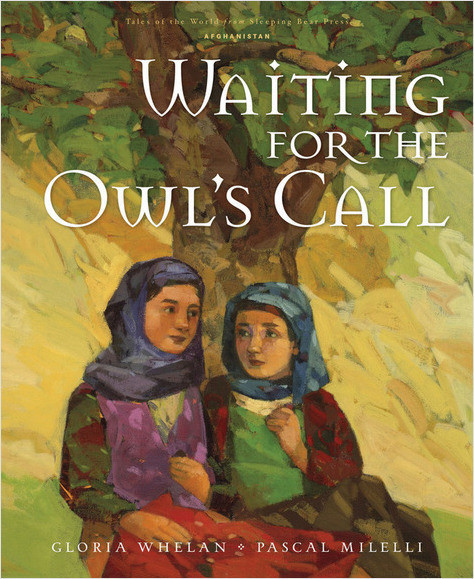 Waiting for the Owl's Call

Eight-year-old Zulviya, her sister and her cousin, her mother and her grandmother... they all belong to the loom. For generations the women of Zulviya's family have earned their living by weaving rugs by hand. The rugs are valuable and the women are proud of their beautiful handiwork. But the work is hard. It takes months to weave a rug; each one contains hundreds of thousands of knots. Before one work day has passed, Zulviya will tie thousands of knots. As she sits at her work, Zulviya weaves not one but two patterns. The pattern on the loom will become a fine rug. She weaves a second pattern in her mind. There she sees the green of the Afghani hills, the bright blue of the nearby lake, and the vivid orange of the setting sun. And Zulviya takes comfort in the landscape in her mind. Gloria Whelan's other picture books in the Tales of the World series are Yuki and the One Thousand Carriers (2008 Society of Illustrators Gold Medal winner) and Yatandou (a Junior Library Guild selection). Ms. Whelan lives in Michigan. Pascal Milelli's illustration clients include Harper's, The Atlantic, and Scribner Books. His picture book, The Art Room, by Susan Vande Griek, received the Amelia Frances Howard-Gibbon Illustrator's Award from the Canadian Library Association in 2003. Pascal lives in Vancouver, Canada.

Pascal Milelli's illustration clients include Harper's, The Atlantic, and Scribner Books, and his work has been featured in Applied Arts and Communication Arts magazines. His picture book, The Art Room, by Susan Vande Griek, received the Amelia Frances Howard-Gibbon Illustrator’s Award from the Canadian Library Association in 2003.