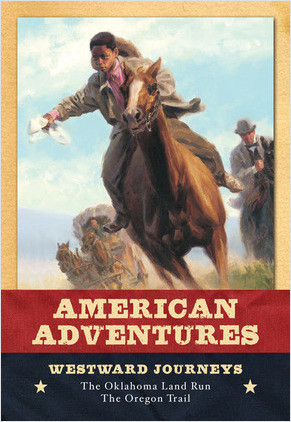 Westward Journeys contains three stories focusing on the American westward expansion, including the Oregon Trail and the Oklahoma Land Run. In Minnow and Rose, Rose and her family are traveling with a wagon train heading west on the Oregon Trail. When she encounters Minnow, a young native girl, their meeting has life-changing results for both cultures. The Oklahoma Land Run is the topic in Pappy's Handkerchief. When Moses and his family hear of free farmland out in Oklahoma, they head west to fulfill a lifelong dream of owning their own land. After a difficult wagon trip, they arrive at the staging point for the Oklahoma Land Run. In A Book for Black-Eyed Susan, Cora's family is faced with tragedy during their journey on the Oregon Trail. When Cora learns she is to be separated from her baby sister, she creates a memento of their journey together.

A graduate of The Ringling School of Art and Design, Bill Farnsworth has spent the last 28 years creating paintings for magazines, advertisements, children’s books, and fine art commissions of portraits and landscapes. A member of the Society of Illustrators, SCBWI, and the Oil Painters of America, his realistic paintings have appeared in many national shows and private collections throughout the United States. He has illustrated more than 50 children's books, including the Kaya books from the American Girl series. His work has been included in the Society of Illustrators Annual Show and the Oil Painters of America National Show. His children’s book awards include a Teachers Choice Award, the 2005 Patricia Gallagher Award, and the 2007 Volunteer State Book Award. Bill lives in Venice, Florida, with his wife, Debbie, and daughters, Allison and Caitlin.