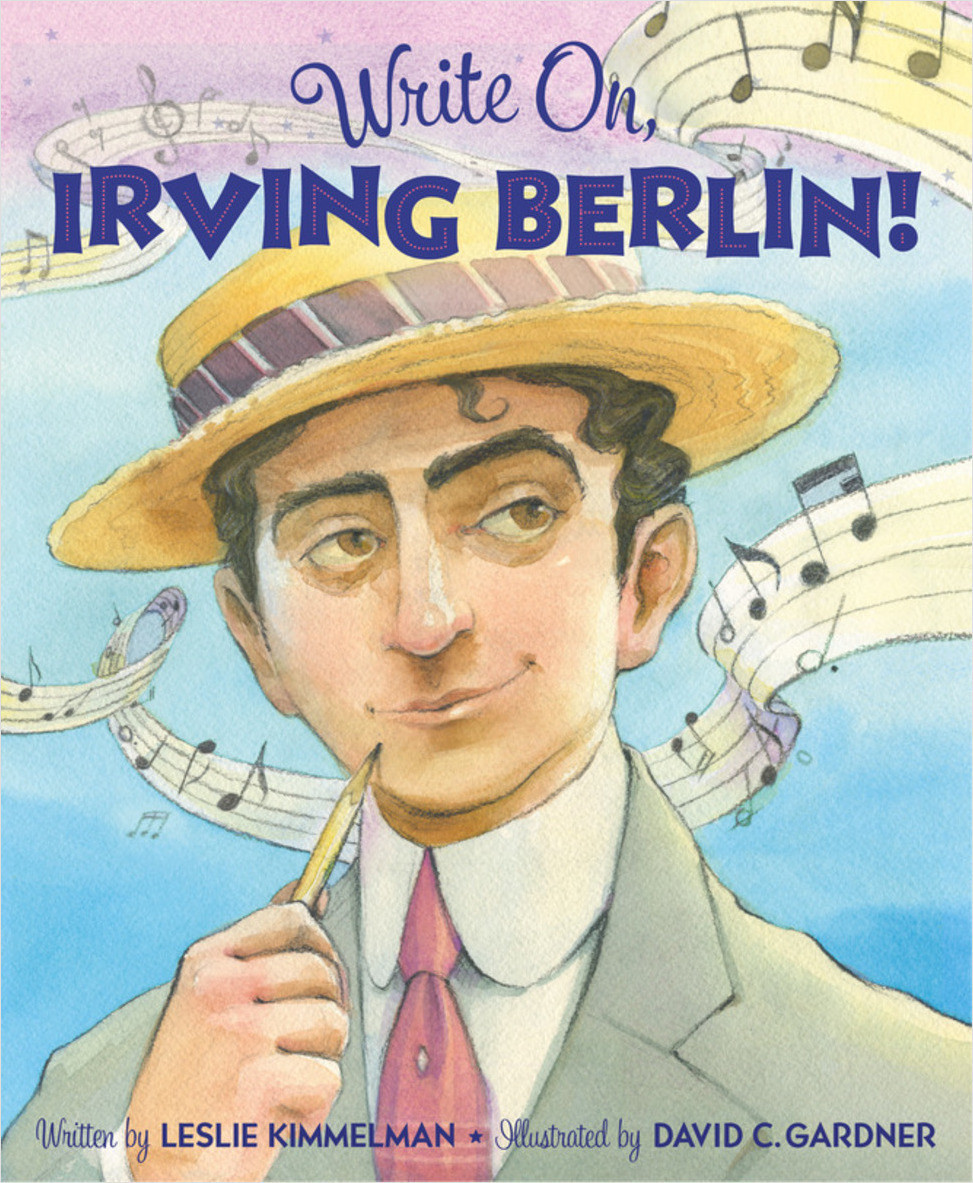 Escaping persecution for being Jewish, the Baline family fled Russia and arrived by ship in New York City harbor in September 1893. Little Israel Isidore Baline is only five years old. After arriving at Ellis Island, the first stop for all immigrants, Israel and his family are ready to begin a new life in America. His family settles in the Lower East Side and soon Israel (now nicknamed Izzy) starts school. And while he learns English, he is not a very good student. According to his teachers he daydreams and sings in class. But while these may not be traits that are helpful in the classroom, these are wonderful tools for a budding singer and composer. And by the time that Izzy (now known as Irving) is a young man, he is well on his way to becoming one of the most well-known composers in America. This vivid picture-book biography examines the life of Irving Berlin, the distinguished artist whose songs, including "God Bless America," continue to be popular today.

Irving Berlin gets the full picture-book treatment in this appealing introduction to the songwriter. Berlin’s story begins as the five-year-old arrives in the United States in 1893 along with his family, fleeing the Russian pogroms. Left fatherless at 13, he makes money by singing and making up tunes, eventually writing the smash hit, “Alexander’s Ragtime Band.” Kimmelman does a fine job of touching on both Berlin’s professional and personal lives and doesn’t shy away from mentioning that not everyone liked the fact that a Jewish immigrant was writing America’s most beloved songs, like “White Christmas.” Her text is long in spots, but readers will come away with a sense of the man and what his music meant to America, especially in times of war. Gardner’s artwork, which captures Berlin’s exuberance, is displayed nicely on oversize pages. The mostly realistic style is softened on some spreads that are executed in chalks, giving the art the gauzy feel of memory. A fine mix of music and the immigrant experience.

Gr 2-4–A feel-good biographical look at a great songwriter. Israel Baline arrived on Ellis Island as a small boy fleeing the violence of Russian pogroms. But in the freedom of New York’s Lower East Side, he blossomed into Irving Berlin. From his first song (sold for 37 cents) to iconic hits like “God Bless America” and “White Christmas,” the irrepressible Berlin used his music to express his love for his adopted homeland. Readers will enjoy following the tale of a young person who uses his talent to reinvent himself. Warm and evocative watercolor illustrations create an appropriate atmosphere for this friendly giant of music. Unless readers are familiar with Berlin’s most famous song, the occasional declarations of “God Bless America!” throughout may seem unexpected and out of place, but ultimately they reinforce the musician’s legacy. The author’s note includes additional informational tidbits, but the list of further reading is somewhat dated; the most recent book is published in 2003. VERDICT A good addition to biography collections that are short on musicians.

Kimmelman portrays the life of Irving Berlin, born Israel Isidore Baline to a Jewish family in Russia in 1888—“a bad time and place to be Jewish,” the author writes. The story begins as the family arrives at New York’s Ellis Island. Gardner’s spreads alternate between bright and crisp scenes of Berlin writing and playing music and more expressive tableaus that show texture and emotion through blurred colors and residual pencil lines. Kimmelman emphasizes Berlin’s devotion to music through a leitmotif: “Nothing stopped Irving from writing songs. Not his new love, Ellin…. Nothing stopped Irving from writing. Not World War II.” Kimmelman focuses on Berlin’s love for his adopted country, as expressed through the song “God Bless America,” and notes his progressive leanings, including performing for integrated audiences of soldiers during the war. A quiet conclusion shows an elderly Berlin gazing at the Statue of Liberty (“He died when he was 101 years old, 96 years after he’d first stepped onto the shores of his beloved United States”). Ages 6–10.

A Jewish immigrant’s passage from pogroms in Russia to “God Bless America”—written 100 years ago to celebrate his beloved adopted home. Irving Berlin, born in 1888, was just a child when his family and so many others fled terror directed at Jews in czarist Russia for New York City’s Lower East Side. It was a crowded, dirty, and very poor neighborhood of immigrants, but it allowed a musical boy who had never studied music to grow up and write songs. Israel, his given name, was not a good student in school, but, a cantor’s son, he had a head full of tunes. Early success led to music composed for fellow soldiers during World War I and then music written for Broadway and the movies. It was during World War II that he “took out and polished up a song he’d written long ago.” That song was “God Bless America,” which is still sung and loved—albeit over the initial protests of those who were not pleased that a Jewish immigrant was the composer and lyricist. “White Christmas,” written during World War II, was also immediately taken to heart despite the same racist, nativist objections. More success and many more great and still popular songs followed. Gardner’s illustrations are colorful and soft-textured, displaying many smiling faces of Berlin as he ages. Musical notes swirl through the pages. Heartwarming Americana.

Leslie Kimmelman is the author of many books for children, including the recent Everybody Bonjours; Mind Your Manners, Alice Roosevelt! (a CELI finalist, Bank Street Best Children’s Book, and NCSS/CBC book); and The Little Red Hen and the Passover Matzah (a Sydney Taylor Notable Book), as well as a number of titles currently in production. Leslie has been a children’s book editor for more than twenty-five years, and is currently working as a part-time editor at Sesame Workshop. She has also written for a variety of parenting magazines, children’s magazines, and Web sites, and has penned numerous books for licensed properties (Nickelodeon, Disney, Sesame Street, and so on) under the name Jodie Shepherd.

Leslie grew up outside Philadelphia, graduated from Middlebury College with a BA in history, and now lives near New York City with her family.

David Gardner is an award-winning illustrator and visual development artist. Before going freelance, he was an artist for several animation studios, including Walt Disney Animation Studios. His work has appeared in magazines, including Cricket and Cobblestone, and he has illustrated numerous picture books, including the historical biographies The Harvey Milk Story and Sarah Gives Thanks. A longtime member of the Society of Children’s Books Writers and Illustrators, Mr. Gardner teaches illustration at Ringling College of Art and Design. To learn more about his work, please visit him at FlyingDogStudio.com.