Elizabeth Traynor’s earliest memory of art was being five and discovering that red paint + yellow paint = orange paint. She started formal art classes at age 10, chose art as her career at 15, and has been an illustrator since graduating from Rhode Island School of Design in 1981. Elizabeth loves illustrating birds, animals, and children, but enjoys drawing almost anything. Her award-winning illustrations have appeared nationwide, and she is represented by Gerald & Cullen Rapp. She loves teaching as well, and was an Illustration and Foundation art instructor at Delaware College of Art & Design for six years. She was head of the Illustration Department for four of those years. 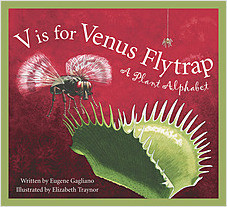 V is for Venus Flytrap: A Plant Alphabet F is for First State: A Delaware Alphabet