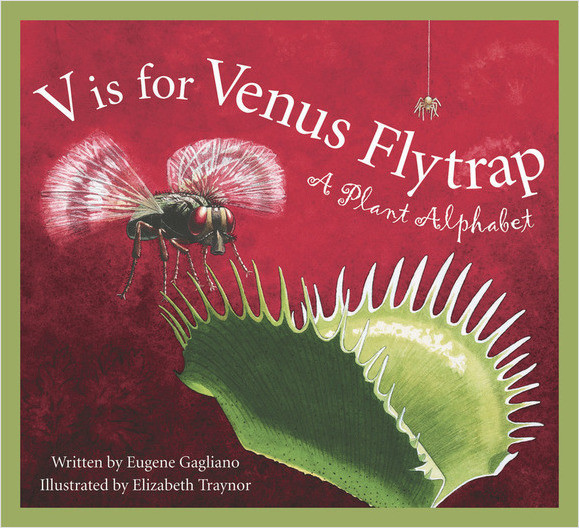 V is for Venus Flytrap

Why do onions make us cry? What popular nut really isn't a nut at all? And what makes a forest a rainforest? The answers to these questions and many other fascinating facts can be found in V is for Venus Flytrap: A Plant Alphabet. Mankind's dependence upon the plant kingdom goes far beyond the food on our table and the air that we breathe. Plants have also provided shelter and led to important advances in medicine and science. Using the alphabet, horticulturalist Eugene Gagliano covers a wide range of topics including exotic species and their locations; plants' role in a healthy lifestyle; food crops and the world economy; and the importance of conservation and environmental stewardship in our world today. After reading V is for Venus Flytrap, young readers will be eager to get their hands dirty and their thumbs green!Retired elementary schoolteacher Eugene Gagliano has had a green thumb since boyhood. He has an A.A.S. in Ornamental Horticulture and owned a greenhouse business for several years. The author of several books for children including C is for Cowboy: A Wyoming Alphabet and Four Wheels West: A Wyoming Number Book, Eugene lives in Buffalo, Wyoming. Elizabeth Traynor received her BFA in illustration from the Rhode Island School of Design. Her work can be seen throughout the country, from book covers, newspapers, and magazines, to ads and packaging. She is a professor of illustration, passing her love and knowledge of the field on to the next generation of artists. Elizabeth lives in Natick, Massachusetts.

V is for Venus Flytrap: A Plant Alphabet - Teaching Guide

Known by many children as the "teacher who dances on his desk," Gene Gagliano is an elementary school teacher and writer with a great sense of humor who lives with his wife Carol at the base of the Bighorn Mountains in Buffalo, Wyoming. He loves children and has four of his own—Gina, Jared, Darin and Nathan—and son-in-law, Ron. A member of the Wyoming Writers and the Society of Children's Book Writers and Illustrators, Gene has been published in "Chicken Soup for the Preteen Soul." His first book, entitled "Secret of the Black Widow," was published in 2002. Gene and Carol are members of a professional singing group, the Polyester Blends. He enjoys making his educational and entertaining school visits, as well as hiking, canoeing, gardening and painting.

Elizabeth Traynor's earliest memory of art was being five and discovering that red paint + yellow paint = orange paint. She started formal art classes at age 10, chose art as her career at 15, and has been an illustrator since graduating from Rhode Island School of Design in 1981. Elizabeth loves illustrating birds, animals, and children, but enjoys drawing almost anything. Her award-winning illustrations have appeared nationwide, and she is represented by Gerald & Cullen Rapp. She loves teaching as well, and was an Illustration and Foundation art instructor at Delaware College of Art & Design for six years. She was head of the Illustration Department for four of those years.