A practicing attorney, William Luttrell was inspired to write Redheaded Robbie after listening to the same Christmas Eve sermon for the third year in a row. His first version was about a redheaded pastor who became flustered every time he had to speak in public. Bill changed the redheaded pastor to a redheaded second-grader, made him say strange words when he because nervous or upset, and Redheaded Robbie was born. Two of his other Christmas stories, “Marielle’s Christmas Gift” and “The Day The Twins Stole Jesus,” have been made into radio dramas. Bill lives near West Chester, Pennsylvania, with his wife Carol and their two daughters, Laura and Lisa. 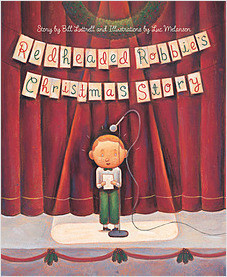