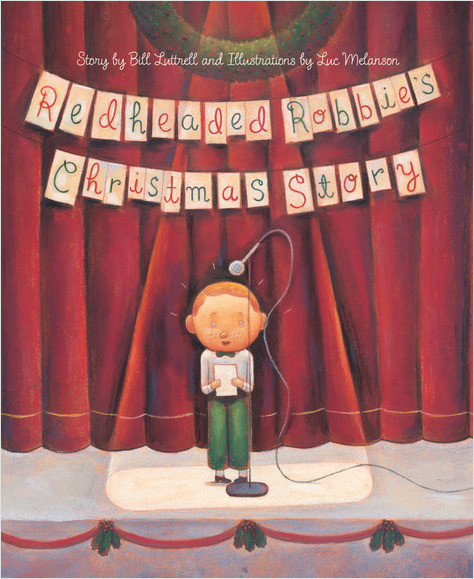 From the Set Holiday Boxed Selection

One student from Mrs. Wallace's second grade class will be chosen to tell a special Christmas story at the school assembly. When Redheaded Robbie's name is pulled from the hat, the class groans. Poor Robbie! Whenever he is excited or nervous, his words come out all twisted and confused. How will he be able to tell his Christmas story at the assembly? Won't everyone laugh? With a little help from some friends, Robbie learns that it is not so much how a person speaks but what is said that matters the most.

A practicing attorney, William Luttrell was inspired to write Redheaded Robbie after listening to the same Christmas Eve sermon for the third year in a row. His first version was about a redheaded pastor who became flustered every time he had to speak in public. Bill changed the redheaded pastor to a redheaded second-grader, made him say strange words when he because nervous or upset, and Redheaded Robbie was born. Two of his other Christmas stories, "Marielle's Christmas Gift" and "The Day The Twins Stole Jesus," have been made into radio dramas. Bill lives near West Chester, Pennsylvania, with his wife Carol and their two daughters, Laura and Lisa.

Luc Melanson has a Bachelor's degree in Graphic Design from the University du Québec à Montréal. For the past 12 years he has devoted himself to illustration, developing a style using acrylic and pastel that has won praise from publishers and corporations alike.He has received numerous awards and accolades for his work, and, in 2002, he won the Governor General's Literary Award for best Canadian picture book for Le Grand Voyage de Monsieur. Luc currently resides with family in Laval (outside Montreal), Canada.